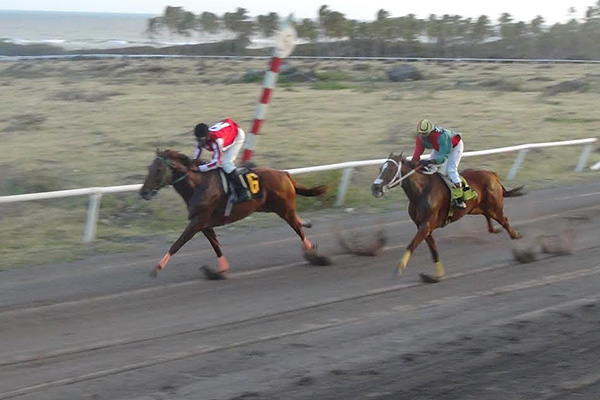 The fast improving young Jockey, Patrick Howell continues to make a name for himself and certainly enhanced his growing reputation on Sunday 9th February as the Nevis Turf and Jockey Club hosted its annual Tourism Gold Cup meet.

There was a bumper crowd on hand which included quite a number of visitors to the island.

In the main event which was missing top horse MR.BIG PEPE, due to illness, there was still a lot of excitement as Patrick Howell on WILD CANDY faced off with Brem Liburd on OBAMA and Dwight Jacobs on LOWETTE’S HILL

The three horses stayed close to each other but on the back stretch it was obvious that OBAMA was tailing and so it came down to a tossup between LOWETT’S HILL and WILD CANDY.

In the final analysis, it was Patrick Howell on WILD CANDY who eased past the finish line in first position to claim the gold cup.

The final race of the day, seemed to have excited the crowd even more and there was some disappointment shown by some patrons when REAL ASPECTATION came through in first position, with HAWLEY’S WILD FIRE dumping its Jockey on the way..

The summary of the races for the day was as follows