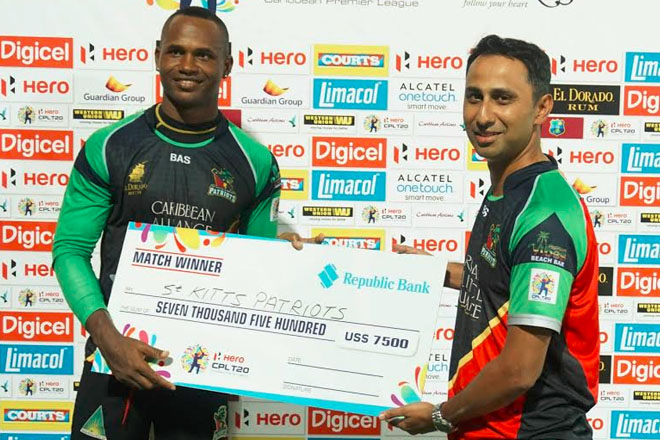 Sports Page — Another massive crowd showed up at the Warner Park Cricket stadium last evening—July 6th to witness another exciting encounter in the ongoing CPL series.

Local team the St.Kitts and Nevis Patriots faced off with the Barbados tridents.

The Patriots’ bowling was generally good however, and the Barbados based team struggled to score freely throughout.

There was only one major difference and that was when Kieron Pollard came to the crease.

He struck a few maximums. Two of them completely clearing the roof of the stands at the far end and were last seen heading towards the Police Station.

Both balls had to be replaced. They eventually got to 135 with Pollard holing out on 49, after deliberately refusing to take an available single the previous delivery.

Shamsi was the stand out bowler with his 4 wickets for 10 runs and Carlos Brathwaite took a blinder of a catch on the long off boundary that brought the entire crowd to its feet.

He had to run a long way and then dive to collect the ball low off the ground. His teammates responded to him, to a man.

When the Patriots batted, they started scoring freely and at one point were scoring at 10 runs per over with Evin Lewis and Guptil scoring freely.

When Lewis was caught at mid-off, he was replaced by captain Marlon Samuels who played an outstanding innings, securing an undefeated 74, to guide his team home with over 3 overs to spare.

Towards the end of the innings, he took a particular liking to the off spinners of Ashley Nurse, slamming him for a maximum and three boundaries. He also pumped up the crowd getting them to cheer loudly as his team closed in on the total.