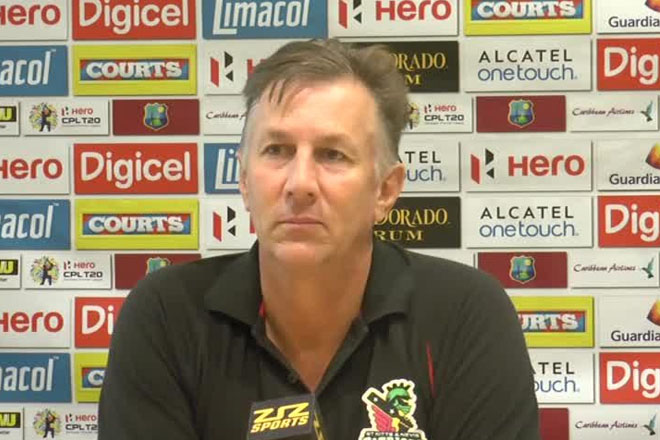 (ZIZ News) – The St. Kitts and Nevis Patriots and the St. Lucia Zouks are both facing injuries to significant players on their squads ahead of Friday’s Caribbean Premier League encounter at Warner Park.

The Patriots lost star bowler Tabraiz Shamsi in his first over of Wednesday’s match against the Guyana Amazon Warriors with a hamstring injury while a hand injury has sidelined Zouks Captain Darren Sammy for the remainder of the tournament.

Patriots Coach, Eric Simons said they will continue to assess Shamsi’s injury but remain hopeful he will play again in the tournament.

If Shamsi’s unable to play on Friday, Coach Simons said there are other players in the squad who can fill the void.

He said, “We have also lost Nikhail Dutta because of Canada withdrawing the N.O.C. which means that we can’t pick him so that means we have to start working on a replacement. I think we’ve got a good squad, we’ve got good options. In our team it’s what we can do so it’s a case of trying to find the right balance; I think that has been one of our strengths. We’ve had really good balance between batting and bowling and different options that we’ve been able to use so certainly losing him from that perspective is a blow because he is unique in a way in what he does and what he brings to the team but there are a few options that we could consider.”

Meanwhile, opening batsman for the St. Lucia Zouks, Andre Fletcher said the loss of Sammy is a major hit to the team.

However, he remained confident the team can overcome that hurdle.

“Losing the captain and one of the most dangerous batsmen in T20 cricket, it would be hard for us as a team but there is nothing we can do about it, it’s already gone we just have to see if we can get someone to replace him and for the upcoming games see if we can go out there and execute our plans and play at our best and hopefully win the other three games.”

Sammy will be replaced as captain by Kevin Pietersen and Keiron Cottoy has been called up to the squad.

Friday’s match between the St. Kitts and Nevis Patriots and the St. Lucia Zouks bowls off at 8pm at Warner Park.