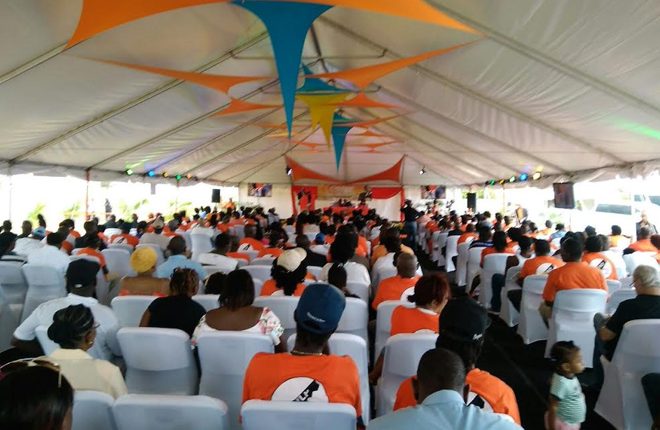 (Press Unit in the Office of the Prime Minister) – The People’s Labour Party (PLP), the youngest political party in St. Kitts and Nevis, held its inaugural National Convention today, Saturday, March 25, at the Tabernacle Recreational Grounds where a new executive was also introduced.

The PLP, launched in June 2013, is one of three political parties that make up the Team Unity Government – the other two being the People’s Action Movement (PAM) of St. Kitts and the Nevis-based Concerned Citizens Movement (CCM).

Following a lively public session, which included performances and speeches by the three leaders of the Team Unity Administration, party members gathered for the private session and voted on the new executive.

In his remarks earlier, Dr. Harris said the hosting of the National Convention fell in line with the party’s constitution which “required us to hold the PLP Convention in March, 2017.” The prime minister said all executive members were notified of the convention in February of this year and noted that those who chose not to attend should therefore have no gripe with the decisions made.

Donald Caines and Heston Hamm were elected to serve as National Party Trustees.