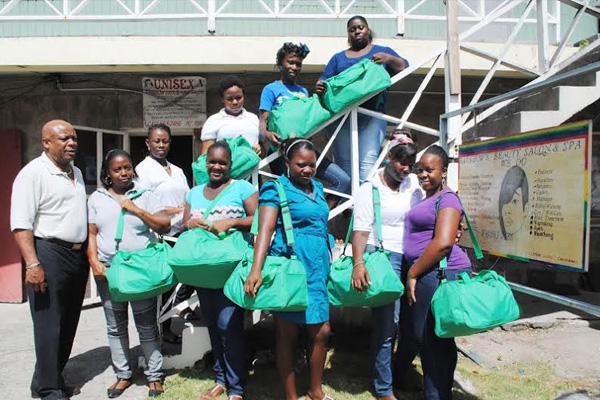 Charlestown, Nevis — A Nevisian is lamenting that the Federation’s Prime Minister the Rt Hon Dr Denzil Douglas and his government are not getting enough credit for the great job that the People Employment Programme (PEP) is doing for the people of the Federation of St. Kitts and Nevis.

“Poverty surveys done on St. Kitts and Nevis show that the critical thing that is advised is that the government commits to continuous training and retraining, and the studies argue that this is the major safeguard against poverty now and for the foreseeable future,” according to Mr Hensley Daniel, PEP’s Training Coordinator for Nevis.

“That is why we have to commend the Prime Minister for introducing the People Employment Programme and for putting training at the disposal of people because in a few years’ time they will be able to earn their income and will be able to move on.”

Mr Daniel made the remarks on Friday June 20 when he visited the People Employment Programme’s nine trainees in Cosmetology under new facilitator, Ms Krista Chapman, at their new training location at Cedar Trees in Charlestown.

“The Federal Government led by Prime Minister the Rt Hon Dr Denzil Douglas doesn’t get enough credit for this because we are the only place in the Caribbean now where the people are being paid to go for training and it is an opportunity which brings a lot of negative from opposition forces but we get carried away often,” observed Mr Daniel.

According to Mr Daniel, Nevis’ cosmetology training started in November last year at the Jessups Community Centre. The initial training focused on theory with reference to practice, and the first three to four months were spent creating the base for the trainees to understand the theory of cosmetology.

They were also given life skills and other special skills training for them to be able to work in conflict situations, and were taught consumer mathematics where the students could have a working knowledge of a business and all of the things which go towards making good business, and interpersonal skills.

“Last month (May), we moved from Jessups Community Centre to Cedar Trees at the cosmetology centre run by Ms Krista Chapman,” explained Mr Daniel. “The students are now getting the chance to apply the theory to practice. Following on from that, we were able to get their cosmetology kits – all the things they need to actually do the hair and nails and all the other things that they do.”

Unlike St. Kitts where the interest is higher and there are more trainees, and the reason PEP established a salon for them at the Newtown Community Centre, PEP did not have the wherewithal to establish one in Nevis as there are only nine trainees which is a number Ms Chapman would handle comfortably at her salon.

“Their skills will be needed on Nevis,” noted Mr Daniel. “When you read economics they tell you the availability of the product or the service creates its own demand. So, the fact that you will have more cosmetology people – trained people – you will obviously have more people requiring the service.”

PEP Facilitator, Ms Krista Chapman, said that the students moved to the upstairs of the building that houses her Rainbow Beauty Salon and Spa at Cedar Trees on May 15where she first tested them on their theory skills as she is not the one who handled them when the training started.

“I assessed them by testing and giving them homework assignments and that was able to give me a clear understanding as to where they would have reached and I actually had to go over most of what they would have done already,” said Ms Chapman.

“We are now going through most of the units of the training module provided by PEP which prepares them for the Caribbean Vocational Qualification (CVQ) examinations under the auspices of the TVET Council. We are now at the colouring unit of the module and we are doing temporary colouring, permanent colouring, and bleaching of hair.”

They received their training kits two weeks ago and according to Ms Chapman, it has helped to boost their morale and willingness to learn and they were very excited when they each received a kit, as it is well equipped with most of the necessities that they need for their training.

New York-born Nevisian PEP trainee, Ms Janelle France, said that she has always done hair since she was in grade six. She said that with the training that she is gaining, she might after a while return to New York for further studies, but her ultimate goal is to have her own business that would also incorporate physiotherapy.

Ms Lorna Jeffers from Cotton Ground said that she joined the PEP cosmetology class because everybody in her family could do hair except her. With the formal training being provided by the People Employment Programme she expects to be the best in her family and be in a position to set up her own business in Cotton Ground.

“PEP is a blessing: It is blessing Nevis big time,” said Ms Jeffers. “To me it is a big help, me a eat so it help me big time. I am getting two things out of PEP – free college and I am being paid to be in that college. What more blessing could anyone ask for?”