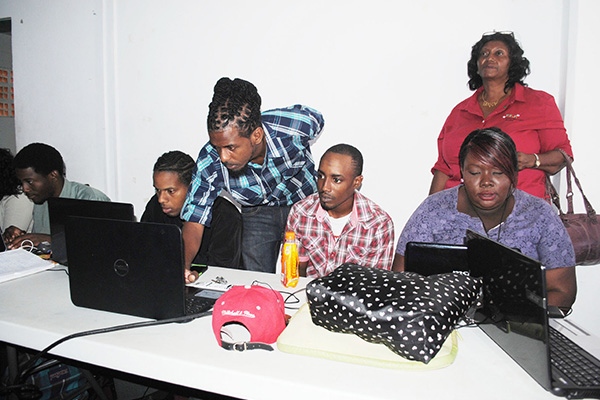 PEP ensuring the Federation meets its long term IT goals

Basseterre, St. Kitts  — Some 18 young, energetic and bright males and females have since June this year been reporting at the Warner Park Football Stadium on Victoria Road in Basseterre each weekday from 9 am for training.

That the venue of this training is the stadium, one would be excused if they were to think that these are persons training in sports. It is a special People Employment Programme (PEP) class that aims at positioning the Federation of St. Kitts and Nevis favourably in a digital world.

“The Government realised very early in the long term that information technology is going to be one of the key drivers of the economy,” says PEP’s Training Coordinator, Mrs Celia Christopher.

“And having realised that they have set about to prepare the young people to fill those positions that will become available when they are needed in the country, hence all of the training that is going on at the Warner Park Football Stadium in one of the meeting rooms.”

According to Mrs Christopher, the class that is under an experienced facilitator, Mr Alphin Thompson, is progressing nicely towards completing level one of the Caribbean Vocational Qualification (CVQ), which is in line with the government’s development plans in the area of IT programmes and computer graphics.

“If you visit that class, you will see how intense the programme is and how these young people are really into computer graphics, having been drawn to this occupational area and I believe in the long run the country will benefit,” says Mrs Christopher.

Facilitator Mr Alphin Thompson is one who comfortably wears two hats. He is a mechanical engineer by training, but is also specialised in computer graphic designs and sign making and that is what he is teaching the PEP sponsored students.

“We have eighteen trainees from the People Employment Programme, and the course started on 3rd June,” according to Mr Thompson. “It had started with 25 trainees, but several of them have gotten permanent employment, and one has gone to college and right now we have 18.”

When the students applied for the course, the one condition was that each person had to have their own laptop computer. Some have very good computers, and at the moment they are learning editing using the versatile Photoshop CS6 programme, having been introduced to computer graphics using the lower version, Photoshop CS3.

“I am training them to do designing, and being able to handle any task when it comes to designs no matter how small, no matter how big from photo editing to creating a business card, a poster or ads for the newspapers, creating T-shirt designs, birthday cards and cards for all occasions,” notes Mr Thompson.

The facilitator stated that he is preparing the students for the CVQ and that they are coming out very well, something the public was able to verify when the People Employment Programme hosted the now much talked about PEP Festival at Independence Square, where the Computer Graphics Art booth was a beehive of activity.

“People were there (at the PEP Festival), and we were the last booth to close,” says Mr Thompson. “We actually worked under the phone lights. We stayed there printing stuff for people. We had a photo booth, and we had many people who were very interested in getting their pictures printed, we created some calendars, Christmas and business cards.

“For the kids we had cartoon characters like the Disney Princes so they could put their names and their picture next to them and stuff like that. We did a lot of customised products under the tent. There was a small cost involved, which was a fraction of what they would usually pay, just for the day. People were interested.”

The class should be through with level one of their training this month and will move on to level two, which should take another three months. They will then be fully qualified to work not only in the Federation, but within the entire Caricom region, and hence the importance of acquiring the Caribbean Vocational Qualification, which will be administered through the local TVET council.