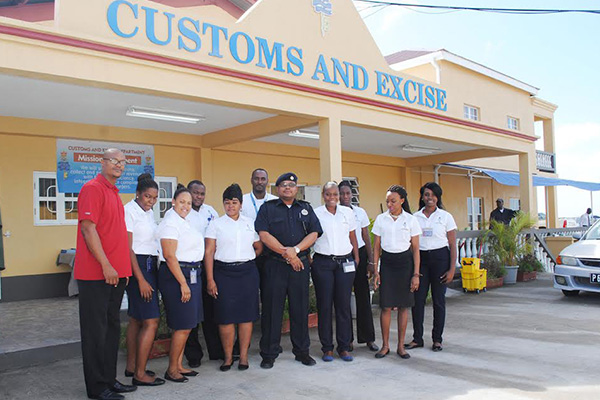 Basseterre, St. Kitts — Thursday January 30 was ‘Open Day’ at the Bird Rock offices of the Customs and Excise Department where members of the public and especially school children paid them visits, to observe and appreciate what this all important department of Government does.

Even as the acting Comptroller of Customs, Mr Georid Belle, led his team of neatly uniformed officers, he took time to reflect on what the People Employment Programme workers have done, as he gave an update to PEP’s Project Manager Mr Geoffrey Hanley who was one of those who visited the Department.

Following an audit study by the International Monetary Fund (IMF), Year 2013 was a watershed one for the St. Kitts-Nevis Customs and Excise Department as one of the requirement was the formation of new units.

The Department had to go through a transitioning period in terms of modernisation, which meant that some of its officers needed to be moved out of operational positions to more of analytical and administrative functions.

It was a tough requirement for the department as officers in line positions had to undergo training. According to Mr Belle, despite the challenges faced, this happened seamlessly with increased all-round efficiency thanks to the People Employment Programme.

“The former Comptroller (Mr Rodney Harris) and I sought out within the high levels of the Ministry and we told them that we understood that the People Employment Programme (PEP) which had been launched in December 2012 would be a good way for us to get assistance with what we were doing,” said Mr Belle.

A total of 42 PEP workers are at the St. Kitts-Nevis Customs and Excise Department where they have been put on the frontline, doing a lot of the clerical work, and processing duties, and that way the more experienced and seasoned officers got a chance to do the training.

“We were kind of limited in terms of the amount of training we could do at any one time because of the amount of people out at a particular time,” observed Mr Belle. “The absorption of PEP workers has allowed us to have a very aggressive training agenda over the last year.

“We were able to open new units and get into more initiatives more timely because they came and contributed to this staff and they have been able to carry a very fair share of the burden that it takes for us to run from day to day. That is what PEP has done for us between 2012 and now.”

The Acting Comptroller observed that the Department carried out an advanced training programme needed for capacity building and the expediency that goes along with the needs of a modern customs department, and gave credit to the People Employment Programme for having enabled them to execute such an aggressive training agenda.

“They have been used in several capacities and they are for a large intent and purpose part of the staff. They carry out the functions that are required by anybody that comes and they show an ability to excel. We do not hold them back; we give them the responsibility and they do it.”

According to Mr Hanley, PEP’s Project Manager, the programme has six different components and those working at the Customs and Excise Department applied through Engaging Qualified Interns Project (EQIP) meaning that they would have had some qualifications or had CXC subjects and higher qualifications, including university degrees.

“I am grateful for the Customs and Excise Department because I was able to comfortably observe so many of our young persons have been given the opportunity to develop their skills,” said Mr Hanley, who met with some of the PEP workers.

“I believe it is something that we need to commend them (Customs) on as when you walk into the compound you cannot tell whether they are PEP workers or not because everybody is uniformed which is a plus again to this specific area.

“So from the PEP standpoint we are extremely happy with the relationship that we have with Customs and I know, in a matter of weeks – or in a matter of months, quite a number of those persons who are at this department would be taken on a permanent basis because I have been getting some very good reports.”