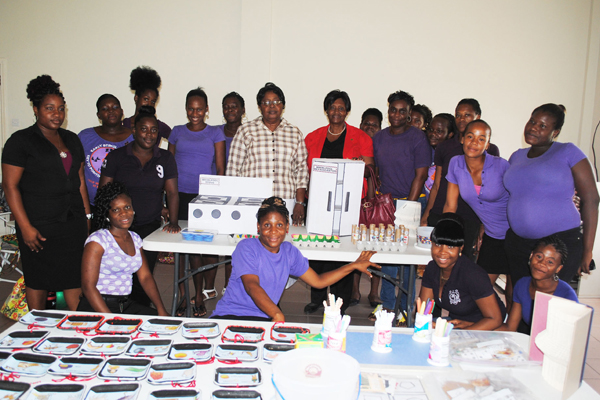 PEP hosts festival at Independence Square to showcase its achievements

BASSETERRE, ST. KITTS — The historic Independence Square in Basseterre will be a beehive of activity Friday November 8, when the People Employment Programme (PEP) hosts a festival to showcase the work that it has been doing since it was launched in December last year by the Prime Minister, the Rt Hon Dr Denzil Douglas.

“We will be celebrating what we call the PEP Festival; a showcase of success,” said PEP’s Project Manager, Mr Geoffrey Hanley. “Basically what is going to happen is that we are going to be transforming the Independence Square to showcase all of the different trainings that would have been taking place in the People Employment Programme from its inception.”

According to Mr Hanley it is an event that is going to be educational and at the same time one that the general public should look forward to, and one that will also be showing appreciation to those persons who are a part of the People Employment Programme. The action-packed festival opens at 10 am and will run until six in the evening so as to give everyone a chance to attend.

The different disciplines of the People Employment Programme will be showcasing what they have so far achieved in the short period the PEP has been making an impact in their lives. They will include people in the mechanical field, furniture and carpentry, and the now famous Women in Construction Trades.

The hospitality sector, which forms one of the largest sectors of PEP, would be displaying various techniques and skills that they would have been taught. This will include a bar where they will showcase their skills. Mr Hanley also says that there will be a happy hour where drinks will be sold at give away prices.

“We also have the Customs Department who have quite a number of persons who are part of the PEP, and they also would be there,” observed Mr Hanley. “We have the electrical discipline group, and they are also going to be showcasing some elements of electricity there in the square.”

There will be an event planning section where persons in PEP will be able to direct and guide someone as it relates to planning an event whether it is a party or a wedding, and to prove their point there will be what they term the ‘PEP wedding’ right at the Independence Square.

Office Administrators under Ms Averil Archibald will be there, as will the Early Childhood Unit under Mrs Vanta Walters, while the agricultural section will have some produce from the various farms that the PEP workers are working on.

There will not be a dull moment at the Independence Square, Mr Hanley promised. “We have the cosmetology team who are going to be there doing makeup, pedicure, manicure, and nails. Some persons from the general public would also be invited to have a makeover whether have their face done or if they care to have their feet done, we will also be extending that to a few persons.”

An important area that the People Employment Programme has facilitated is the training of healthcare workers in the form of Nursing Attendants, and along with those who are working with the Social Development as healthcare officers, they will have a booth where apart from showcasing what they would have learnt, they will also organise a mini blood drive as well.

Others will be fire fighters who have been trained under PEP and will showcase what they can do, and there are also persons who are trained at the Snapper Farm in Conaree, who will be able to walk persons through the process of how they are able to breed tilapia, a fresh water fish, in salt water.

“The Parks and Beaches Unit are also going to showcase in terms of what happens in their section,” noted Mr Hanley. “There are going to be a number of pictures that will be on display as well, in terms of giving the general public a real practical idea of what happens in PEP other than just people thinking it is just cutting grass.”

The culinary arts section, which has incidentally borrowed the expertise of Mr Geoffrey Hanley, has a number of cakes that have been prepared and will be on display at the PEP Festival.

“This is a discipline and a training exercise that we are going to be offering to persons, so that at the end of it after they have been taught the techniques and the knowhow of baking and decorating a cake, they can also go out and start their own business in terms of doing cake designs,” said Mr Hanley who added that he learnt the art of cake making overseas while he was at the university.

Among the features that will make the festival lively will include persons winning prizes by participating in the PEP dip, and there will also be gifts that persons will be winning in form of vouchers that they can go to a stall, get their nails or their face done. Some of the pieces that the PEP workers would have made will be up for raffle and also sale.

“There will also be a kids’ zone where those persons who would have been coached in physical education, football, cricket throughout the schools they are going to be there to demonstrate to the public some of the things that take place in the schools, because it is not just the going out and running up and down during lunch time or during break, there is more to it and then some surprises.

“There is much more that I could explain here, but to capture it all and get an appreciation of what the People Employment Programme has done for the youth of this country, it is advisable to visit the Independence Square on Friday November 8,” said Mr Geoffrey Hanley. “We have the PEP Goddess who is going to appear at the appropriate time in the Square so persons can take picture with the PEP Goddess.”