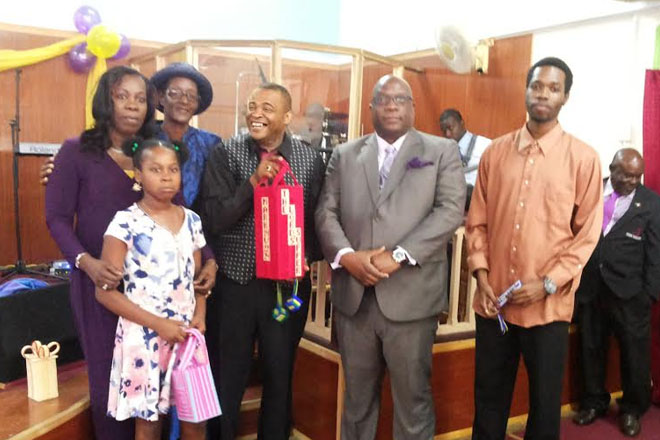 Bishop Matthew Hepburn of the Word of Life New Testament Church of God on Central Street in Basseterre and members of his congregation decided to give fathers a treat on Father’s Day, Sunday June 19, an event that proceeded exceedingly well. Among those attending included Prime Minister Dr the Hon Timothy Harris, and cabinet minister the Hon Ian ‘Patches’ Liburd.

But unknown to the Good Bishop, members of the People Employment Programme (PEP) group who are part of the St. Kitts-Nevis Association of Persons with Disabilities (SKNAPD) and who hold classes at the McKnight Community Centre were part of the large congregation. At the end of the service they surprised him with gifts of craft items they would have made as part of their training.

Ms Mary Clarke, Secretary of the St. Kitts-Nevis Association of Persons with Disabilities (SKNAPD) and who is a facilitator of the PEP class, told Bishop Hepburn that as a group they always remember that there is a family that holds him (Bishop) together and announced that she had gifts for him and his family.

The gifts, she advised, were made by members of the PEP class at the McKnight Community Centre and observed that it was very emotional to see the participants put the items together. She noted that she was surprised to see one of the items that they made had a flag of St. Vincent and the Grenadines embroidered on it because she always thought Bishop Hepburn was from Jamaica.

The items were a jewellery box presented to Pastor Lindalee Hepburn, who was named the ‘Royal Lady’ by Ms Clarke; a bag for their daughter Royalty; a bookmark for their son JeQuon; and the best was saved for last – a wine bag for the Lord’s Supper with Bible scriptures embroidered on it, and a dice to be dangled on the rear view mirror of his car which were presented to the Bishop.

Pastor Lindalee Hepburn was invited by Ms Mary Clarke to visit the PEP participants at their training classes which are held at the McKnight Community Centre on any day of the week and she would be presented with jewellery items that are made by the PEP participants, so as to fill up her jewellery box.

After the Bishop and members of his family received their gifts from Ms Clarke, they were joined for a picture by Prime Minister Dr the Hon Timothy Harris, who is the Federal Minister with responsibility for the People Employment Programme (PEP).

It was however clarified at the end of the service that Prime Minister Harris had been invited to the church by one of its members who is hoping to win a 42in flat screen TV for inviting the most persons to the church. With a contingent of members of the Royal St. Christopher and Nevis Police Force in full uniform, also invited by the same church member, present at the church she is a hot contender for the big prize.

Ms Clarke said that the group missed one of its members, the late Mr Antonia Richardson who was murdered at his home recently saying that as a doting father to his daughter the church setting on Father’s Day would have been an ideal one for him in the sense that the following day, Monday June 20, would have been his 30th birthday.

“I have a special relationship with the people living with disability,” said Bishop Matthew Hepburn after he received the gifts: “For some they have written them off in the society, but for us in this church we have embraced them as people, and disability is not inability.

“There is a lot that they have to offer, so we embrace them in this church, and they have given us gifts today which we appreciate very, very much and if you could see their artwork that they do you could visit them at the community centre in McKnight and see what they are doing and I just pray God’s blessing upon them.”

Also present at the church service was PEP staff member, Ms Diana Pemberton, who is a member of the Word of Life New Testament Church of God on Central Street in Basseterre.

According to Ms Shirley Adams, a facilitator for the People Employment Programme (PEP) class that caters for members of the St. Kitts-Nevis Association of Persons with Disabilities (SKNAPD), interactive classes are held every day of the week and craft is one of the main subjects.

A booth has been acquired at the Old Treasury in Basseterre where participants Ms Shodella Taylor, Mr Galveston Elliott, and Mr Jamal Herbert are going to be the main persons who will be doing craft items that would be offered to the general public for sale.

Ms Mary Clarke pointed out that delay in the opening of the booth is due to the death of their member Mr Antonia Richardson who was the lead person coordinating its setting up and the eventual opening.

“Presently there is a person working on the booth putting it in place, making it accessible for persons with disabilities because we are going to have participant Ms Shodella Taylor go there from time to time,” explained Ms Clarke.

“We are going to try to get each one of the members to go down and, I would say it would be done in probably two weeks’ time and members of the public will be invited to come and see what persons living with disabilities are capable of doing as a result of the PEP intervention.”