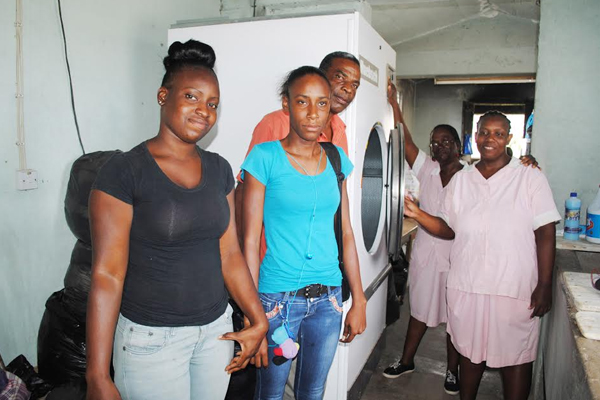 PEP trainees attend to electrical problems at the Cardin Home

BASSETERRE, ST. KITTS — Twenty-three year old Nakita James celebrated International Women’s Day with lots of pride. She is a People Employment Programme (PEP) trainee who chose to do a man’s job and because of her bold move, staff and inmates at the Cardin Home have reason to smile.

The former Basseterre High School student heard of the People Employment Programme that had been launched by the Prime Minister the Rt Hon Dr Denzil Douglas last year. On learning of the benefits it was offering she decided it was the way to go if she was to make it out in life as a productive member of the society.

She went to the PEP office at Dorset, and staff there explained to her the options that were on offer in the area of training. She chose to join the class doing electrical.

“I already knew like woman stuff is to do the hair and nails and doing electrical as a woman it was going to be like a task,” explained Nakita on being asked why she chose an area that is considered a men’s domain.

“I needed the challenge and hence the reason I opted to do electrical as I wanted to show people that even women can do it. I have gained a lot of experience in electrical. I could do any wiring at home.”

Her expertise was put to test recently when the Cardin Home contacted PEP’s Facilitator for Electrical, Mr Owen Ward, and said to him that they were experiencing problems with a number of electrical appliances and if he could go to check them.

“Some people call us,” said Mr Ward. “The PEP Secretariat will also indicate to us where there is need and one of them was the Cardin Home where they had problems for some time, something they could not fix for six years so we went there and we got that sorted out.”

According to Mr Ward, the Home had an electrical cooker and dryer that they were unable to connect and an air conditioning unit that was not working. He sent a group of PEP Electrical trainees, among them Nakita James.

“As for the cooker, all the fitting was there but the problem I think was they did not know how to set it up and it was the same with the dryer,” explained Mr Ward. “As for the air conditioning unit, it was an old one. What happened is the one that was in the office was not working and so they asked us to move one from another place to replace the one that was not working.”

This electrical class, which is currently based at Project Strong, started last year with twenty students but some have left and gone to various work places. It is now down to fourteen, seven females and seven males. The facilitator says that they are very good in practical work and right now he is concentrating on the theoretical part of the training.

“When I finish the course I could either go for employment or set up my own small practise,” said a beaming Nakita. “PEP is a good programme because it helps you to learn a skill while you are being paid. I am happy with the training in electrical, because when I went to PEP I chose to do it.”

Nineteen-year old Jamal Pemberton of Tabernacle Village, who was among those who assisted fix the problems at the Cardin Home, admitted that when he went to the PEP office he had applied to do plumbing but was informed that the class was full and it was then that he chose to do electrical.

“My father is a plumber and I wanted to train in that field so that I could join forces with him,” explained Jamal. “But after having attended Mr Ward’s class, I now realise that my father and I will make an even stronger team, because he will do the plumbing work and I will do the electrical work.

“PEP is a good thing for everybody for it gives you the chance to go out and you learn something. Now I am able to do wiring in a house. I actually know how to do it and at my home I do not have to call anyone to come and tell them to wire my house, and if my neighbours have problems I could come in handy so they won’t have to spend a night in the dark or go without a meal if the problem is the cooker.”