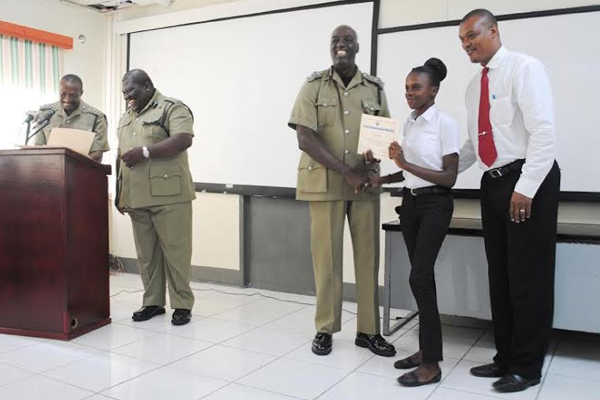 Basseterre, St. Kitts — Project Manager of the People Employment Programme (PEP), Mr Geoffrey Hanley has said that the programme’s partnership with the Royal St. Christopher and Nevis Police Force is benefitting the country.

“The graduation of fourteen members of the People Employment Programme-sponsored Tourist Patrol Officers now means that the safety of visitors to our shores has gone a notch up as these officers will have undivided attention as they execute their jobs,” observed Mr Hanley.

Mr Hanley was reacting after the graduation of 29 Island Constables on Friday April 11 at the Police Training Complex, where they were conferred with their certificates by the Commissioner of Police Dr Celvin G. Walwyn.

“Tourism is the major foreign exchange earner, and it was a privilege for us at the People Employment Programme when the Commissioner of Police made request of us that we provide personnel for the Tourist Patrol Officers who would be trained as Island Constables and be given police powers,” said Mr Hanley.

“With their graduation and their having been given the rights and privileges of becoming Royal St. Christopher and Nevis Police Officers, it will mean that they will relieve the regular police officers from doing those duties. The Management Committee of the PEP wishes to thank the Commissioner of Police for giving us that opportunity, and congratulates the 14 officers on their successful completion of the course.”

During the graduation ceremony, Commissioner of Police Dr Celvin G. Walwyn shared a light moment when he said a young lady, Ms Vanessa Carty, had sent him a WhatsApp message informing him that she was looking for a job.

“I had a WhatsApp from this young lady, saying ‘Commissioner I am looking for work’, and we just had the Tourist Security Officer Programme as an idea, and here is this young lady who was telling me could she be a part of something, anything, because she needs to work,” said Commissioner Walwyn.

Apart from the certificates that were presented to the students of Island Constable Training No. 1/2014 by Commissioner of Police Dr Celvin Walwyn, prizes were also given.

Police Force Chaplain Superintendent Pastor Leroy Benjamin presented an award to Ms Vanessa Parris of SCAPA who had correctly answered his question during the opening ceremony, and another award to Ms Alicia Liddie who returned the highest marks when the students sat a written test.

The students through Ms Vanessa Parris, who gave the vote of thanks, presented plaques of appreciation to their instructors at the Police Training Complex.