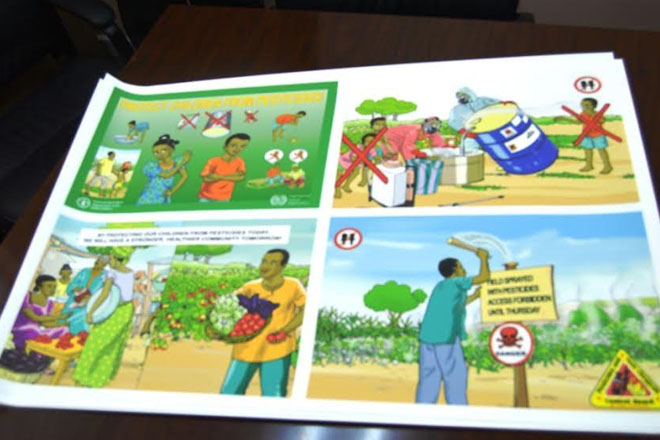 Basseterre, St. Kitts (SKNIS) — The Ministry of Agriculture, Marine Resources and Cooperatives has placed great importance on protecting children in the Federation from the harmful effects of pesticides by dedicating a week called Pesticides Awareness Week under the theme “Protect Children from Pesticides” to heighten awareness. The week runs from September 20th -27th.

Honourable Eugene Hamilton, Minister of Agriculture, Marine Resources and Cooperatives, said children are more prone to picking up diseases due to exposure to pesticides.

“When it comes to pesticides, children are among the most vulnerable,” said the Honourable Minister, adding that children drink 2.5 times more water, eat 3-4 times more food and breathe 2 times more air. “Therefore, they absorb a higher concentration of pesticides than adults during a period of exposure.”

Minister Hamilton said it is important to understand how children are exposed to pesticides, the negative effects of pesticides on human health and development, why children are at a greater risk, and what can be done to reduce children’s exposure to pesticides in communities, in order to protect the nation’s youth.

To underscore the importance of safeguarding children from the negative effects of pesticides, a week of activities has been planned in the federation to synchronize with regional efforts.

A highlight of the week was the distribution of Pesticide Safety posters to all private and public schools in St. Kitts on Thursday 23rd. A similar presentation will be held in Nevis on Friday 25th.

Alistair Edwards, Permanent Secretary in the Ministry of Agriculture et al, stated the importance of this initiative.

“We thought that the place that has the most children is schools,” said Mr. Edwards. “Once we educate them, then we can reach their parents and the wider community. Pesticides are dangerous; however, they can be very useful once used correctly.”

Other activities of the week included a panel discussion on ZIZ on Monday September 21st, and workshops on Pesticide Safety on Tuesday 22nd and Wednesday 23rd. A special edition of Agriculture in Context will air a themed programme on the issue on Sunday 27th.