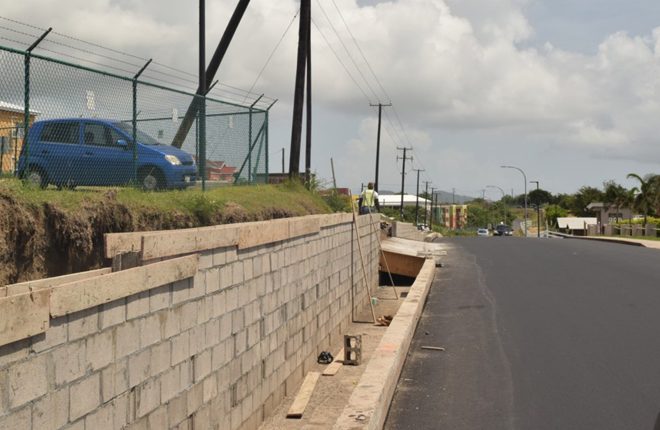 Basseterre, St. Kitts, October 04, 2018 (SKNIS): Work on Phase 1 of the resurfacing and realignment of the main road in St. Kitts is approximately 80 percent complete.

At the Prime Minister’s monthly press conference on Thursday (October 04), Minister of Public Infrastructure, the Honourable Ian Patches Liburd, updated the public on the project that began in June 2018. Resurfacing and realignment activities under Phase 1 cover the areas between Camps and Challengers, and Keys and Conaree. Drain and sidewalk construction is also being undertaken.

“All told, that amounts to about $7 million being earned by local contractors,” said Minister Liburd, noting that about 120 workers are engaged in the various components of the rehabilitation work.

The project has suffered some delays due to the recent weeks of inclement weather as well as an issue with the quarry supply needed for the concrete. The issue at the quarry has since been resolved for the most part. The repositioning of underground utility lines also presented some challenges as they were being moved to sections where they can easily be accessed.

Minister Liburd stated that Phase 1 is expected to wrap up later this month. He also called on motorists to exercise caution when travelling in areas where the men are at work. There have been reports of vehicles speeding, which pose a threat to the safety of the construction workers and other drivers. All motorists were strongly encouraged to abide by the various traffic signs and instructions.

“I must also thank all of the persons who use the road for their high tolerance,” Minister Liburd added, citing the dust that is created at certain points. “We want to thank everybody for their patience [and] I can assure you that at the end you will be proud that we have one of the best road networks in the entire Caribbean.”

Phase 2 will cover Keys to Bloody Point and is expected to begin shortly after the current work is completed. An open tendering process will invite bids from contractors to execute the project. October 2019 is the target deadline for the entire road rehabilitation project.