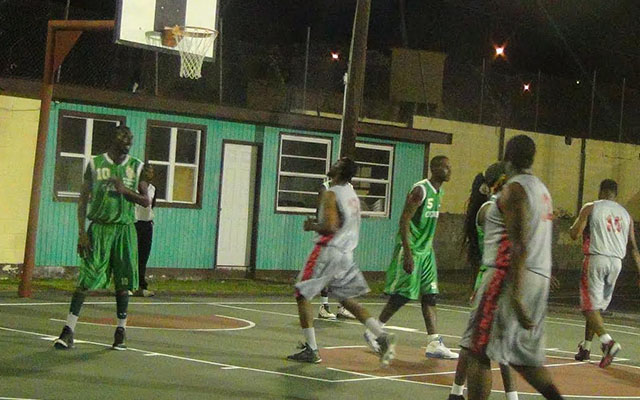 PJ’s hangs on in cliff hanger

Two of the top teams out of Nevis ,clashed in a very intriguing contest on Thursday night, as part of the SKNABA league. The match up was between Champions in the local league, CG Rebels and arch rivals, PJ’S.

The match was played at the Grell Hull –Stevens Netball Complex in front of a spattering of spectators.

Both teams played with a sense of purpose and exchanged the lead at rapid intervals.

There were some super plays and two slam dunks by Justin Jeffers -of the CG Rebels, were extra special.

At the end of the third quarter, PJ’S were leading by the slimmest of margins—one point.

Into the fourth quarter, a few missed shots on both sides of the court, caused much chagrin for both benches and a couple of shots from the penalty spot proved crucial.

Suddenly, PJ’S edged away with a five point lead and looked comfortable with under a minute remaining in the game.

However, with the score on 63 to 57 in the favour of PJ’S, the wily and experienced CG Rebels men called for a time out and came back on court with a deliberate strategy.

They made every second count, as they forced the PJ’S men into fouling them and sunk a number of shots from the penalty spot, with the clock stopped.

It came down to a score line of 63 to 60 with just five seconds remaining on the clock and a nervous PJ’s took a time out.

When both teams returned to the court, it was PJ’S sinking a decisive point.