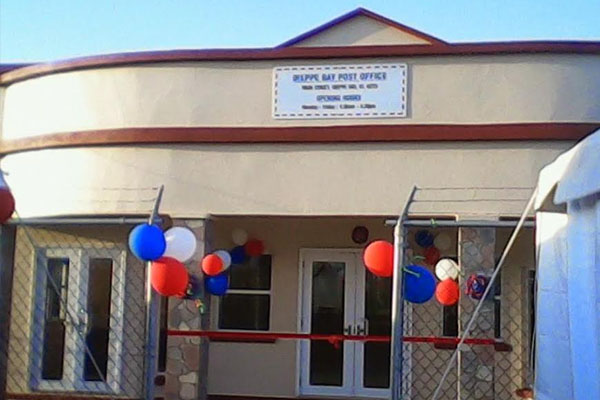 Basseterre, St. Kitts (CUOPM) — With the official opening of the new Post Office in Dieppe Bay, the residents of the Capisterre area in St. Kitts will soon be able to pay other bills.

“The people of Capisterre will no longer have to leave this area to mail a letter and receive other services. In addition, there will now be private mail boxes here as you have been told, providing the convenience to the residents of this area and of their mail being delivered to boxes specifically designated to them. And this is happening for the first time in this particular area,” said Prime Minister Douglas at the official opening of the new Dieppe Bay Post Office.

“We do not wish this Post Office to be a place only where we send and receive mails. We want this to be a place where the residents of Capisterre region, would be able to pay their bills. The paying of the bills is important as well and so we are making it easier and more convenient for you to pay your bills and thus become part and parcel of those citizens who continue to contribute in the development of our country,” said Prime Minister Douglas.

“We want this to be a place also where the people of this area, who wish to order items on the internet, but who are lacking a U.S. address, will be able to order those items with the help of this post office. This is a modern age with 60% of our people have access to the internet. So we must have the convenience of being able to use the internet for the services for which we desire,” said Prime Minister Douglas.

The Dieppe Bay Post Office brings to six the number of post offices around the island of St. Kitts. There are two in Nevis.

There are post offices in Basseterre, Cayon, Tabernacle, Sandy Point, and Old Road in St. Kitts.