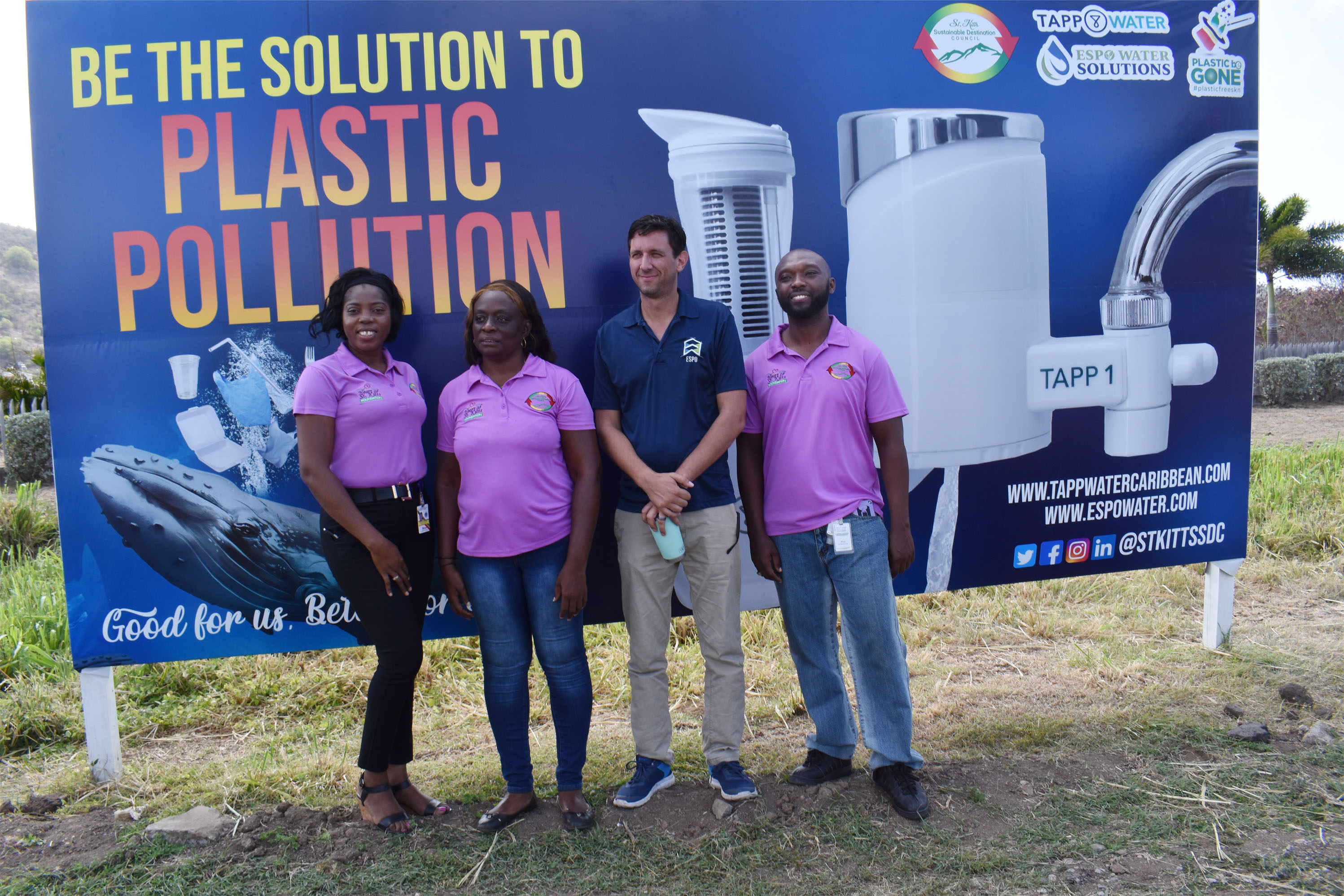 Basseterre, St. Kitts, July 1, 2022 (MMS-SKN) — The St. Kitts Sustainable Destination Council (SDC) is passionately calling on citizens and residents to be a solution to plastic pollution as the island observes ‘St. Kitts Plastic Free July (PFJ) 2022’ under the theme ‘Be part of the solution – help end plastic pollution.’

The call was made on Friday, July 1, when members of the St. Kitts Sustainable Destination Council led by their Chair, Mrs Diannille Taylor-Williams, gathered on Kim Collins Highway at the airport roundabout to unveil a billboard inviting all to be the solution to plastic pollution.

“Here we are, 1st of July, 2022, another year promoting a plastic-free St. Kitts, and its Plastic Free July,” said Mrs Taylor-Williams. “We have partnered with one of our St. Kitts Sustainable Destination Council members, Tapp Water Caribbean and Espo Water Solution to unveil this sign which tells us about being plastic-free.”

Citizens and residents were encouraged to be a part of the solution by doing different things, including using fewer water bottles, using reusable bags as opposed to plastic bags that are offered at supermarkets and other business outlets, and skipping the use of plastic straws. She pointed out that those are the things the Sustainable Destination Council has planned to do as they educate the public on how to reduce plastic pollution.

“We the members of the SDC invite you to be a solution to plastic pollution,” they said in unison, as they posed in front of the new billboard

Meanwhile, Tapp Water Caribbean Project Manager, Mr Chris Stichnothe, introduced two of his company’s products that are portrayed on the billboard, the Tapp Ultra filter, and the Tapp PitcherPro filter.

“These are two of our products here,” said Mr Stichnothe. “The Tapp Ultra filter, which saves you a lot of money incurred by bottled water, is attached directly to the faucet and each filter provides 3,000 litres of purified water. This is saving the environment from all the use of single-use plastic, as it takes out fluoride, lead, and microplastics from the water coming through the tap, which is the subject for the Plastic Free July.”

The second product, the TappPro filter is a glass pitcher that holds 1.4 litres of water all one needs is to fill it up from the faucet and it takes out fluoride, leads, and microplastics as one pours the water from it. It can be stored in a fridge as it does not take up lots of space. Its filter should be changed four times a year. The third product he mentioned was the TappToGo Bottle, which he had in his hands.