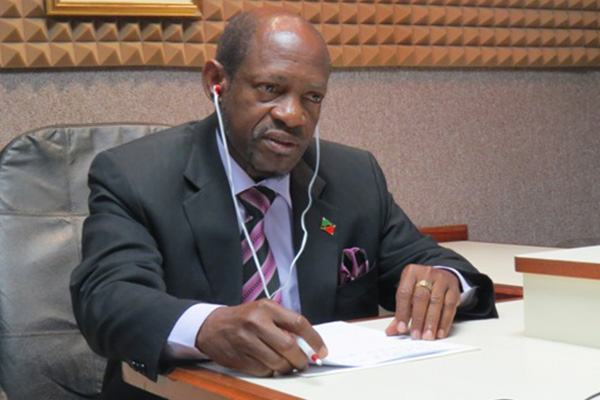 Basseterre, St. Kitts (CUOPM) — St. Kitts and Nevis’ Prime Minister the Rt. Hon. Dr. Denzil L. Douglas says the Motion of No Confidence is still a matter of high priority, but is in an agreement that he stands with the Speaker in awaiting the hearing and judgement of the substantive matter, first brought to the High Court by the Federal Opposition.

Responding to a caller during his weekly radio call in programme ‘Ask the Prime Minister” Dr. Douglas agreed with Mr. Marcus Hull that the PAM/Kennedy Simmonds Administration, who had several lawyers at their disposal, deliberately exclaimed no time frame when a Motion of No Confidence must be heard in the 1983 Constitution, when all the other Eastern Caribbean islands like Antigua and Barbuda, St. Vincent and the Grenadines and Barbados, who had included time frames, achieved Independence before St. Kitts and Nevis.

“We are the last country in the set of islands in the Eastern Caribbean to attain Independence, well after Antigua and Barbuda, St. Lucia, and St. Vincent. It is very strange that our Constitution does not speak to the issue as to when a Motion of No Confidence is to be heard in our Parliament, if it is tabled and if it is brought to the Parliament,” said Dr. Douglas in response to Mr. Hull, who had called on the Prime Minister to “Stand your ground.”

“I want to say to the people of St. Kitts and Nevis and to the Labour party supporters to hold your ground, because I shall stand my ground. Firstly, I believe Marcus is right, because when the Motion of No Confidence was first called, a lot of people didn’t understand what is a motion of no confidence because they had been so far removed from 1982 and 1983,that people had forgotten in this parliamentary democracy, what a motion of no confidence really is and they needed to be reminded that back in 1981, 1982 or 1983, that there were two (2) Motions of No Confidence facing the Simmonds Government by the Leader of the Opposition then, Sir Lee Llewellyn Moore,” he recalled.

He pointed out that when St. Kitts and Nevis went into Independence, “those Motions of No Confidence were there pending to be completed, in terms of being heard and debated in our Parliament.”

“The very general expression that is being used is ‘it must be heard with priority’ as quickly as possible, but it does not specify as other Constitutions have done, saying it must be heard within a specific time period. St. Vincent and The Grenadines specifies exactly when a motion should be heard and just in the event that the Speaker of the Assembly is an elected member of the Parliament and maybe reluctant to bring a Motion of No Confidence to the House for debate; it goes on further and say in the event where the Speaker does not bring it, the Clerk of the House is constitutionally empowered to have it tabled in the Parliament for debate,” said Prime Minister Douglas.

He said that is one of the things that the leaders of the Caribbean have come to terms with over the last few days during the Inter-Sessional in St. Vincent and the Grenadines.

“The fact that our constitution and the rules and procedures that govern the conduct of the Parliament, do not specifically state when a Motion of No Confidence is to be brought to the Parliament,” reiterated the Prime Minister, who also referred o Barbados.

“In Barbados, it is not in there in the Constitution but the procedures as to the conduct of the House, specifies when a motion is to be tabled. That is also left out in our Constitution and this is because the Simmonds/PAM Administration deliberately left it out in our Constitution because they did not wish to be pressured as the government and as an administration to have any motion heard in the Parliament of St. Kitts and Nevis,” Dr. Douglas said, pointing out that some legal minds who helped to craft the St. Kitts and Nevis 1983 Constitution are still around today.

“To make it worse really, it was Tapley Seaton, who was the Attorney General of St. Kitts & Nevis, who is still alive and is talking on the radio about this motion should be heard now. The same man who deliberately left out, when it should have been specified in the Constitution, he left it out and now today all of a sudden his lips are unsealed and he is talking about the motion must be heard now,” said Dr. Douglas.

He also referred to lawyer Constance Mitcham, who was not a Member of the government then, but was part and parcel of the PAM/Simmonds Administration.

“Terry Byron who was and is still a lawyer today and who on more than one occasion acted as Attorney General. He is a prominent lawyer. His own brother is in the Parliament today so what are they talking about. It is not because this present Prime Minister does not understand the urgency and the priority nature of the matter,’ said Dr. Douglas.

“When all of them conveniently 30 years ago refused to do what was right, you now expect me to go right their wrong? I am not righting nobody’s wrong. I right my own wrong,” said the Prime Minister, who added that his Government awaits the ruling of the High Court matter on the substantive matter, which is still to be heard.