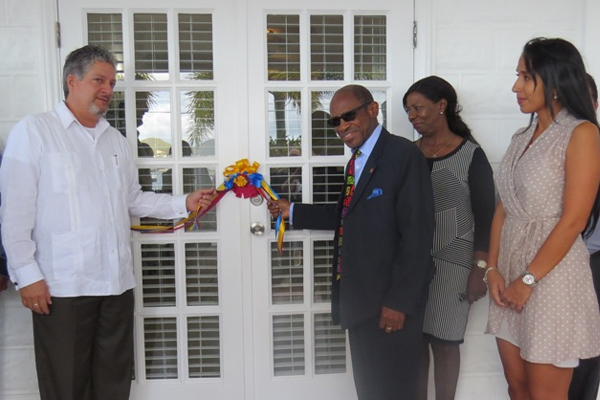 Basseterre, St. Kitts, (CUOPM) — St. Kitts and Nevis and the Bolivarian Republic of Venezuela are expected to further cement diplomatic relations with the re- opening of the new Venezuelan Embassy at a new location, following a fire which destroyed the building at a previous location.

Venezuela’s Resident Ambassador, His Excellency Rómulo Camilo Henríquez González made the remark at a brief ceremony to open the new Embassy on Horsford Road.

Ambassador Gonzalez used the opportunity to announce that discussions are taking place with Brazil to establish a language lab in St. Kitts and Nevis.

St. Kitts and Nevis’ Prime Minister the Rt. Hon. Dr. Denzil L. Douglas at the invitation of Ambassador Gonzalez, joined him in cutting the ribbon to officially the embassy next to the Embassy of Brazil.

Among the invited guests were Premier of Nevis, the Hon. Vance Amory; Members of Parliament; Cabinet Secretary, Mr. Joseph Edmeade; Resident Ambassador of the Republic of China (Taiwan); His Excellency Miguel Tsao and Mrs. Tsao and other members of the Diplomatic and Consular Corps.