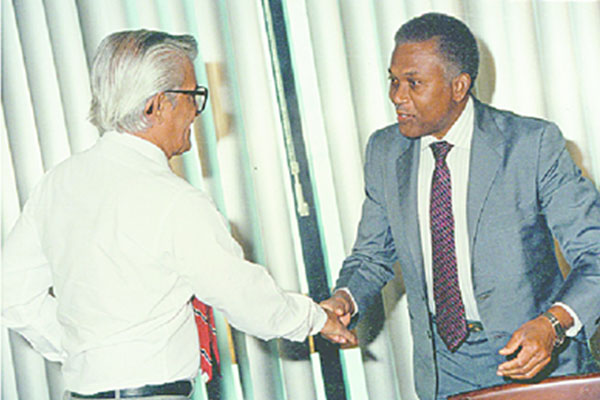 (CUOPM) – Former President and Prime Minister of Trinidad and Tobago, A.N.R. Robinson was not only committed and determined but also possessed great personal courage.

St. Kitts and Nevis’ Prime Minister the Right Hon. Dr. Denzil L. Douglas in paying tribute to the late Trinidad and Tobago leader who died earlier this week noted that ANR Robinson showed his mettle as a leader and a man when, with his own life in the attempted military coup in 1990 and also served as both President and Prime Minister of Trinidad & Tobago, the land of his birth.

“Former Prime Minister Robinson was blessed with a long life, having died at the age of 87. It is not for his longevity that he will be honoured, however, but for the use to which he put the many years that were placed at his disposal,” said Prime Minister Douglas, who added that Prime Minister Robinson proved himself to be a person not only of great commitment and determination, but of great personal courage as well.

Dr. Douglas in a statement pointed out that the attempt by undemocratic interests to militarily overthrow the Government of Trinidad & Tobago in 1990, gave the world the measure of ANR Robinson as a leader and a man when, with his own life under real and immediate threat, he insisted that the forces of democratic governance never, under any circumstances, capitulate to those who wish to assume power by means that dishonour the democratic processes and/or the electorally expressed wishes of the people.

“Throughout the Caribbean, we will always strive both to identify new areas of possible collaboration as well as to strengthen those that already exist. And in recent decades, the Caribbean Single Market and Economy has been a familiar topic of discussion both at the level of Caricom Heads of Government as well as the region’s students,” Dr. Douglas said.
“Pivotal to this was the vision and commitment of the late ANR Robinson, who, twenty-five years ago this year, added his important voice to this historic initiative in Grand Anse, Grenada,” said Dr. Douglas.
He said ANR Robinson “lived at a time of transition and change in the Caribbean region. Throughout, he assessed the changes emerging around us and attempted to steer them in a direction that would redound to the benefit us all. He has earned a special place in the annals of Caribbean history, and I am honored to have known and worked with him.”