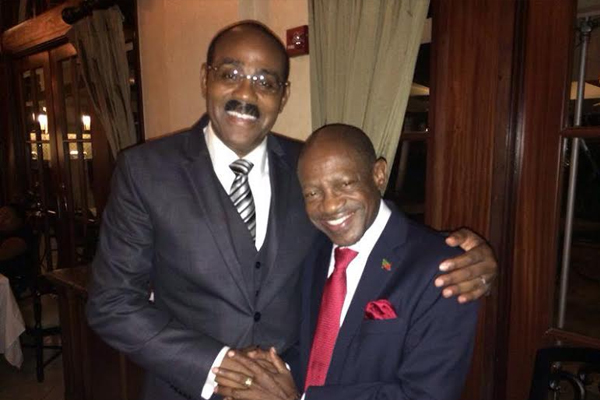 Basseterre, St. Kitts (CUOPM) – The Federation’s Prime Minister the Rt. Hon. Dr. Denzil L. Douglas is leading the St. Kitts and Nevis delegation to the 35th Regular Meeting of the Conference of Caribbean Heads of Government in Antigua and Barbuda.

The Meeting of CARICOM Heads, which will be chaired by the new prime minister of Antigua and Barbuda the Hon. Gaston Browne, will consider a range of issues including a report of the CARICOM Commission on the Economy, and the status of negotiations for a CARICOM-Canada Trade and Development Agreement.

In addition, several business leaders from, and operating in CARICOM member countries will discuss with the Heads of Government economic priorities for the region.

Discussions will also be held with the Prime Minister of Spain, His Excellency Mariano Rajoy Brey on issues including advancing technical cooperation with the CARICOM region.

Heads of Government will also hold talks with the Minister of Foreign Affairs of Cuba His Excellency Bruno Rodrigues Parilla on CARICOM-Cuba relations and preparations for the Fifth CARICOM-Cuba Summit to be held in Havana, Cuba on December 8, 2014.

Other agenda items for discussions and decision include the operations of the CARICOM Implementation Agency for Crime and Security (IMPACS); the terms of reference of the Regional Commission on Marijuana; continued access of students of the University of Guyana to the Council of Legal Education Law Schools; approval of a strategic plan for the Caribbean Community; the region’s position on climate change and preparations for the High Level Meeting on Small Island Developing States (SIDS) to be held in Samoa in September 2014; and a report from the Pan Caribbean Partnership Against HIV/AIDS (PANCAP) on actions to address and control HIV/AIDS in the region.

The five year plan, 2015-19, CARICOM officials hope it will reposition the Community to deal with a changing global environment.

The plan has been developed following widespread public consultation across the region and the leaders will seek to reach agreement on top priority areas for focused attention over the five year period of the plan.