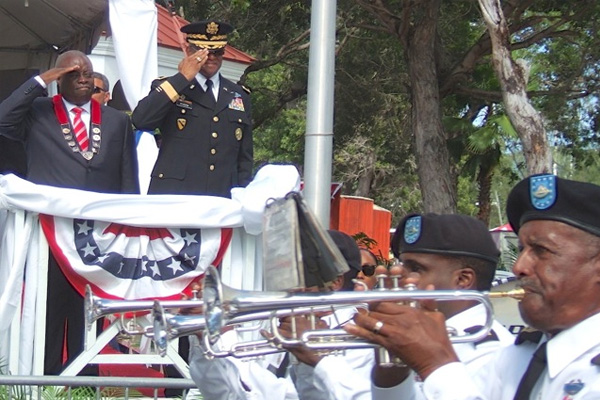 Basseterre, St. Kitts (CUOPM) — St. Kitts and Nevis has congratulated the new Governor of the United States Virgin Islands, the Hon. Kenneth E. Mapp on his recent inauguration as the territory’s 29th Governor.

Mr. Mapp received 65% of the vote in a run-off, which Prime Minister the Rt. Hon. Dr. Denzil Douglas in his message said “is a clear indication of the massive support from the electorate, and its full confidence in your combined leadership.”

“Undoubtedly, your former stint as Lieutenant Governor and your participation in two gubernatorial races have adequately equipped you for your present assumption of power. I am confident that you will exercise sound judgment and prudence throughout your tenure by embracing all Virgin Islanders for the further advancement of your beloved countries,” Dr. Douglas said.

The Prime Minister told Governor Mapp that the Federation of St. Kitts and Nevis and the United States Virgin Islands have a long history of shared culture and values.

“Values steeped in democracy, equality for all, good governance and respect for the rule of law. We remain committed to these principles and stand ready to lend support where we can,” he said.

The St. Kitts and Nevis leader hoped that both leaders can meet in the near future to deliberate and strategize on ways of enhancing their bilateral agenda.

“Welcome once again to the helm of politics and I wish you every success as you execute your role as a representative of the people,” said Prime Minister Douglas in his message to Governor Mapp.