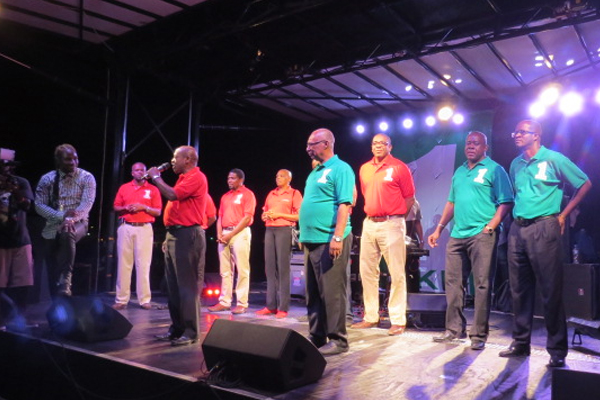 PM Douglas: Contract for Progress solidifies the future of both islands as one nation

Pinney’s Beach/Port Zante, St. Kitts and Nevis (CUOPM) — The draft Contract for Progress between the governing St. Kitts-Nevis Labour Party and the Nevis Reformation Party is to benefit of the people of the twin-island Federation.

“We believe that tonight is a very unique experience, because it speaks to a commitment, not only a commitment now, but a commitment in the future for our people to better cooperate and collaborate and share with each other,” said National Political Leader of the St. Kitts-Nevis Labour Party (SKNLP), Prime Minister the Rt. Hon. Dr. Denzil L. Douglas.

Speaking simultaneously to over 2,500 people in Nevis and over 5,000 in St. Kitts, with the Political Leader of the Nevis Reformation (NRP), the Hon. Joseph Parry besides him at Pinney’s Beach, Dr. Douglas said the Contract for Progress solidifies the future of both islands as one nation.

“Tonight is a night when the families of St. Kitts and the families of Nevis are coming together. This is the history in making. Tonight here on Pinney’s Beach, history is being made when the people of Nevis and the people of St. Kitts, through various parties are expressing a oneness together in the future,” said Prime Minister Douglas, who noted that the Federation has had several achievements.

“We have achieved number one in so many different ways. #1 in economic development; #1 in attracting the most Foreign Direct Investment in the Caribbean; #1 in academic achievements in English and Mathematics in the Caribbean. #1 under Douglas, #1 under Parry, #1 here in the Caribbean Region. But there is much more that we can achieve together,” he said.

Prime Minister Douglas said the finalisation of the Contract for Progress between the people of St. Kitts and the people of Nevis can achieve much.

“The Contract for Progress will ensure that whatever there is, we would be able to share it equitably and so tonight we shall have an agreement presented to you the people.We are not signing anything behind closed doors, we bring it to you the people here in public on Pinney’s Beach and we would want you to read it, we would want you to comment upon it, we would want you if possible to tear it apart and put it together again in a way that will make us one. And when we would have received your comments, we will then be able to frame a document, a document of the people for the benefit of the oneness of St. Kitts and Nevis,” said Prime Minister Douglas.

“When the people of Nevis and the people of St. Kitts are saying, ‘we are one,’ we will move together as one for a brighter future. Let us make sure that St. Kitts and Nevis remains #1 in the Caribbean and #1 in the world,” he said.