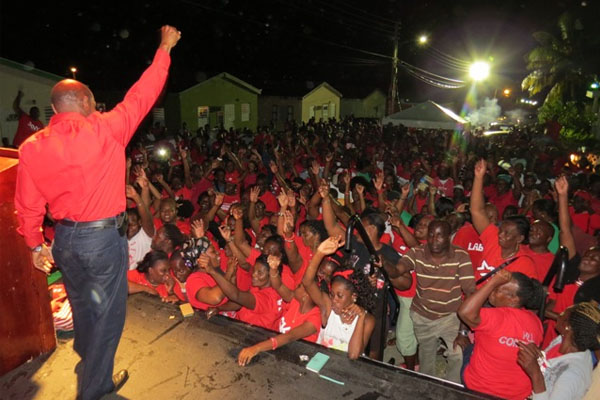 Basseterre, St. Kitts (CUOPM) — St. Kitts and Nevis’ Prime Minister the Right Hon. Dr. Denzil L. Douglas Tuesday defended the decision to have a realignment of the constituency boundaries ahead of the next general elections accusing opposition legislators of seeking such a move in the past.

Speaking on his weekly radio programme “Ask the Prime Minister,” Dr. Douglas said even his one-time Deputy Prime Minister the Hon. Sam Condor had tried prior to the 2010 general election, to get the main opposition People’s Action Movement (PAM) to agree on the need to change the constituency boundaries.

“But the opposition refused even then to cooperate, indeed writing the Commonwealth and others to make clear that the Honourable Sam Condor was so utterly and completely unacceptable to them as the chair of the Commission that they would refuse to participate in any of its undertakings,” Dr. Douglas said.

CMC reported that Prime Minister Douglas said the authorities had also received from opposition legislators and candidates the need to address “the unacceptable reality” pertaining to the size of some of the constituencies, with one having at least 7,000 inhabitants and another just over 2,000.

“That is why listeners this Labour government has for several years been methodically and constitutionally working to make the country‘s constituencies more similar in terms of population size,” he said.

Dr. Douglas said in keeping with the “cry” of opposition legislator Hon. Mark Brantley in 2009, Parliament this month “voted to create far less varied constituencies in our country.”

Prime Minister Douglas said that until then Brantley’s constituency had a total of 6,300 people as against fewer than 2,700 for Vance Amory, the new premier of Nevis.

Last Friday, opposition legislators had sought unsuccessfully to prevent the resolution on the boundaries being debated in Parliament and they have since gone to the courts to obtain an ex-parte injunction seeking to prevent the authorities from proclaiming the constituency boundaries changes ahead of the next general elections.

On Monday, Justice Marlene Carter ruled that she will hear arguments on the matter on Thursday.

Prime Minister Douglas told radio listeners that the realignment of the boundaries meant that the differences were now at least 1,000 as against 5,000 in the past.

“That is what responsible governance demands. In addition to addressing the 2009 pleas of Mark Brantley, the Constitution and the international election observers, Parliament last week also completed the work which the Honourable Sam Condor has so long ago and so passionately begun, but which he was repeatedly and viciously prevented from accomplishing by the People’s Action Movement in general…”

“So I choose to ignore it as should you. If any of the organizations listed did indeed authorize this however, I invite them to indicate this by circulating an official and signed document …and I will be more than please to engage them in any discussion on this very important and long overdue action,” Dr. Douglas said.

He said he also wanted the groups to share their response to talk of “death and killings” on radio by opposition candidates, funders and supporters and most importantly “media outlets permitting these statements to be aired”.

Dr. Douglas, who is leading his St. Kitts-Nevis Labour Party (SKNLP) into the next general election seeking an unprecedented fifth consecutive term in office, said that voters would soon know the date for the poll.