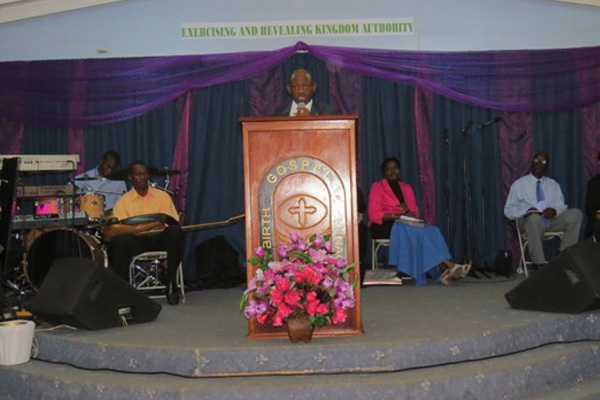 PM Douglas gives thanks for the 19 years of the St. Kitts-Nevis Labour Party Government

Basseterre, St. Kitts (CUOPM) – St. Kitts and Nevis’ Prime Minister the Rt. Hon. Dr. Denzil L. Douglas told the congregation at the New Birth Gospel Tabernacle on Sunday that despite challenges over the past 19 years, the St. Kitts-Nevis Labour Party and Government have made progress in several sectors of the twin-island nation.

“As we think back to where we were as a party and as a Government, and a nation back in 1995, with the future stretched out before us, unknown and unknowable. There was no way for us to know – as we assumed office back in July 4th 1995, filled with hope, faith, and love of our country – that our country would be ravaged by the five hurricanes in five years.

He pointed out that it was not known 19 years ago which of the Federation’s young men and women would step forward in the coming years, seeking help in their quest to become mechanics and doctors, teachers and carpenters, lawyers and plumbers and engineers and architects and teachers and beauticians too.

“But one thing we knew is that even as we first entered the halls of government, that we would do everything, everything in our power to make the financial institutions that were under the Government’s control, our relationships with other countries, and resources to which our government might have access in the future, that bridge over which our young people would walk, the keys that would open new doors to thousands of affordable homes and the hope that would change the course of their lives .and that of their children forever and ever,” he told the congregation.

Prime Minister Douglas said his Government would go to the ends of the earth to provide learning opportunities, and training opportunities as well, whether at home or in institutions far from these shores, to ensure the development and the advancement of the youths of this proud nation, at levels never, ever before seen in this country, so their hearts might be glad.

“We did not know exactly which men and women in 1995 would turn to us in search of land to farm or homes to call their own or land to build new churches and expand their churches or assistance in starting new businesses. But we knew, even as we took the oath of office nineteen years ago, that we would use all of our mental capabilities, and all of our governmental authority, to deliver all this – and more – to our farmers, to our parents, to our young people and our not so-young people in this, the land of their birth,” he said.

The congregation was also told that it was not known back in 1995 that way into the future, personal conflicts would be shifted to the level of the 82-year-old St. Kitts-Nevis Labour Party.

“But they were. And, as he has promised, he bound up our wounds, he has stop the hemorrhage, healing has taken place, and he has placed us on a straight path; the case is now straight that we going for all 8. Because church, as we have been taught, ‘Unless a kernel of wheat falls to the ground and dies, it remains only a single seed. But if it dies, it produces many more seeds.’ What man, in his simplicity, sees as death, the Eternal, and the Universal, and the Infinite at the dawn of time ordained to bring new life, new hope and new birth right here in New Birth,” said Dr. Douglas, suggesting that it is now Springtime for all in the Labour Party.

He gave thanks for the inner cohesion and the singularity of purpose that define the Party and for the faith and loyalty, the encouragement and the support, the advice and the very wise counsel that have been brought to all on so many occasions, by so many over the years.

“But more than anything else, we give thanks for your support and for your praise not only to this congregation but to all the congregation across this land, your praise that we behold and we would continue on our mission and path and services we give thanks today, most of all, we the leadership the servant leaders of our great party and Government, we give thanks most of all for our long-held and long-demonstrated awareness that the St. Kitts-Nevis Labour Party was elected to serve all the people of this country regardless of class, religion, or political persuasion – without fail. And this we have faithfully done. For each and every one of our nineteen years. For on this, the full flowering of our Nation depends. And for all this and more, this day, we give thanks, we give God thanks today and always, we give him thanks. And for all this – and more – this day, we make a joyful noise unto the Lord. This awesome God and we shall never forget really who we are. God bless you. Thank you.

Amen. And Amen,” said Prime Minister Douglas, who is also the National Political Leader of the St. Kitts-Nevis Labour Party.

St. Kitts And Nevis Marks International Day For The Elimination Of Violence Against…