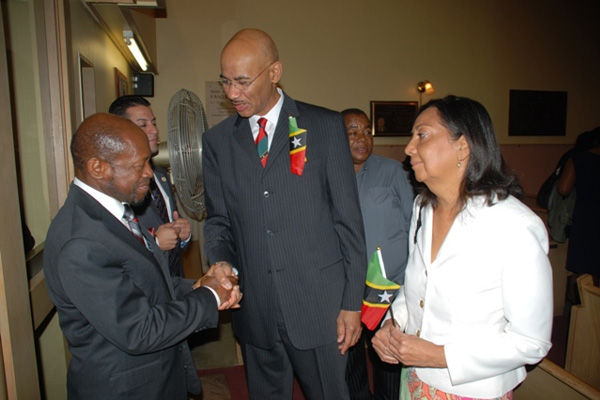 Basseterre, St. Kitts (CUOPM) – Nationals of the Federation of St. Kitts and Nevis at home and around the world have been congratulated for celebration the country’s recent milestone.

“I want to thank and commend all of our national organizations and associations abroad. Those in Miami, where I attended a function; those in Texas, Atlanta, in New York, in Washington, in Toronto, in St. Maarten, in the British Virgin Islands, the United States Virgin Islands; all of those who have come together at this time when we celebrated our 30th Anniversary of Independence and they have marked this milestone in their own way,” said Dr. Douglas during his weekly radio programme “Ask the Prime Minister,” on Tuesday.

“Whether it was through national associations or whether there were families coming together to celebrate, I want to commend the organisers in particular for those events in New York of which I attended,” Dr. Douglas told listeners.

“I want to thank KABA – the Kittitian Benevolent Association (KABA) led by Mrs. Robinson. She has been there ever since I have been the Prime Minister and maybe before that, she has been a part of the leadership of that organization. And every year she has been very faithful in holding the Independence Service there in the Bronx. I want to commend her and thank all of the people who attended,” said Prime Minister Douglas, who praised the Federation’s Ambassador to the United States of America, Her Excellency, Mrs. Jacinth Henry Martin, “who has been making it her special duty to attend and if not able to attend however, to be engaged and involved in every single activity that the associations are pursuing.”

“I want to thank Ambassador to the United Nations, His Excellency, Delano Bart for the support that has been provided and also Ambassador Her Excellency Astona Browne and my Press Secretary Erasmus Williams, who travelled with me and also the Foreign Minister, the Hon. Patrice Nisbett who also works with us there in New York,” said Prime Minister Douglas.

The St. Kitts and Nevis leader also thanked the Reverend Edmund Martin “who could very well be listening to this programme. I want to thank him again for the sermon that he brought which lifted the hearts of the congregation and made that special service, really, special as he reminded us of what we have achieved and what good leadership is to a people that is achieving God’s will.”

“I want to thank all for the support that has been provided from Florida, all the way up to Texas, Atlanta, New York, Washington; we thank you so very, very much for your support,” Prime Minister Douglas told listeners.

In Miami, Florida, the 30th Anniversary of Independence and the 15th Annual Dinner and Ball were celebrated by the St. Kitts and Nevis Association of South Florida (SNAF) at the Howard Johnson Hotel where the keynote address was delivered by the Honorary Consul of St. Kitts and Nevis, Mr. Brian Keeley, the CEO of Baptist Health.

The normal morning worship on Sunday 29th September 2013 at the Beulah Wesleyan Methodist Church in Harlem, where the Prime Minister Douglas, Ambassador Bart and Ambassador Martin were invited to speak.

The Special Service at the Crawford Methodist Church began with a musical prelude by Santoy Barrett. The Opening Prayer was said by Margie Estwick, followed by greetings by the President of KABA, Mrs Margaret Robinson, and announcements and acknowledgements by Shirley Nelson.

Following a beautiful rendition by well known Ms. Marguerite Arthur ton, greetings from Ambassadors Henry-Martin and Bart, Ms. Glennis Belgrove read the Old Testament, the Gospel by Helen Byron-Baker, a musical selection by Adrianne Huggins-Young, the New Testament reading was by Eugene Francis, the message was delivered by Nevisian-born Rev. Edmund Martin of the St. Mark’s United Methodist Church in New York, prior to his introduction by Mr. Edmund (Tony) Sadio.

After the offertory, a musical selection by Michelle, Adelia and Maryam Francis and a Poem by Heather Archibald, the National Anthem was sung followed by remarks by the St. Kitts and Nevis Prime Minister.

Scholarships were presented to persons by COMPAS Inc and the Vote of Thanks by Mr. Randy Wyatt.

In Toronto, Canada, a reception preceded the Gala Dinner during which the DJ Leslie “Sugar Bowl” Morton, and Bruce Skerritt & the Liamuiga Project.

The large gathering was welcomed by Honorary Consul General, Mr. John Allen and introductions by Miss Jacinda Liburd, who along with Constantine Greenaway wee Mistress and Master of Ceremony.

Following the blessing by Pastor Gilbert Estridge, dinner was served and awards presented.