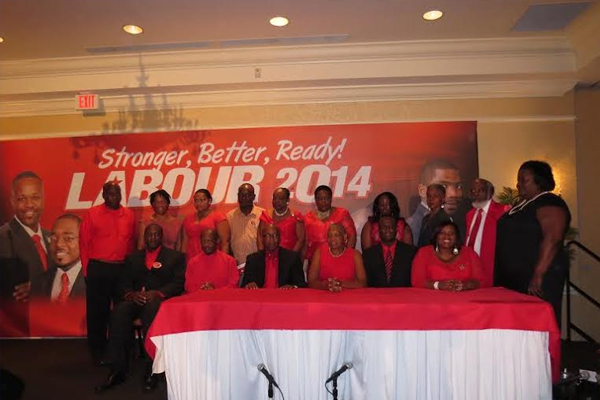 Dr. Douglas, who was first elected in 1989, was re-elected un-opposed at the 82nd Annual Conference on Sunday, another expression of full confidence in his leadership of the Party and the Government that he has been leading for the past 19 years.

The National Vice Chairman is the Hon. Nigel Carty, Minister of Education, Information and Agriculture.

The other members of the National Executive are Ms. Thamesha Fyfield, who received 180 votes; Mr. Terry Williams, 214 votes and Mrs. Hazel Ross-Robinson, 169 votes.

St. Christopher 4, and 8 and Young Labour and Labour Women will name their representatives later.

In his opening address, Prime Minister Douglas pointed to the 82 year old tradition whereby each year at the annual Party Conference, every single official in the party resigns.

“A tradition whereby each year at this event, every single Labour Party official loses all standing within the Party so that all those who wish to lead the Party – in any capacity whatsoever – would be free to seek the support and endorsement of the members of our Party. It’s an honour that we uphold that tradition today. And then, that tradition having been upheld, that tradition having been honored, we will, as a party, with complete openness and transparency, proclaim to the nation – and the world – the men and women whom the members of the St. Kitts-Nevis Labour Party wish to lead this great Party,” said Dr. Douglas.

He stressed that the leadership of the St. Kitts-Nevis Labour Party do not merely claim to be pro-democracy.

“We live and breathe these most sacred tenets of democracy. And this we have done throughout the entirety of our eighty-three year history. And it is this adherence to these rock-solid democratic principles that have caused the St. Kitts-Nevis Labour Party, our Party, to be recognized throughout the region as the largest, the most cohesive, the most visionary, and the most effective political party in the history of St. Kitts and Nevis,” said Dr. Douglas.