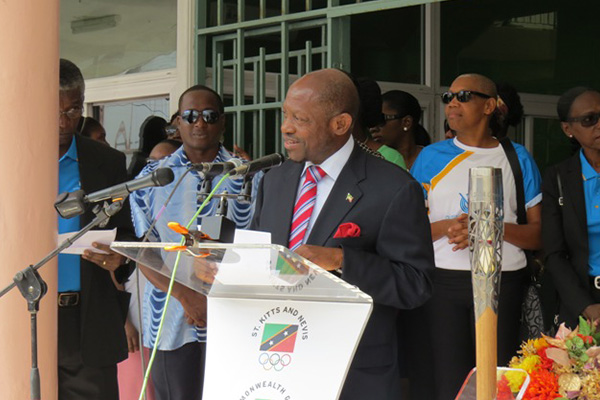 Basseterre, St. Kitts (CUOPM) — Shortly after receiving the Queen’s baton, ahead of the Commonwealth Games to be held in Scotland this year, St. Kitts and Nevis’ Prime Minister the Right Hon. Dr. Denzil L. Douglas, the symbol of the games is a reminder of its thrills and excitement.

He told local and Commonwealth Games officials as well as athletes from various local sporting disciplines and a large crowd that gathered outside Government Headquarters to witness the arrival of the baton, which contains the message of Queen Elizabeth II, that the games exhibits endurance, triumphs and disappointments.

“Man was made to test himself against real or perceived limitations. And from time immemorial, man has had the urge to run, to leap, to delight in the body’s ability to dash, almost at lightning speed, to defy gravity and to display strengths that are beyond the norm,” said Prime Minister, pointing out that these instincts are evidence of an ancient wisdom which seems to have been hard-wired into our very DNA, and this the passage of time has only served to confirm – namely that there is a powerful mind/body connection that physical activity is a balm to our souls and that healthy bodies lead to healthy minds. And who epitomizes this better than the world’s athletes?

“What delight they bring to the more sedentary members of the human family with their feats of endurance and their displays of triumph. Indeed, what character they display when, even in so-called losing, they neither give up nor despair, but simply live to run, or leap, or throw another day,” he said.

Prime Minister Douglas noted that from Ghana to Australia, and from India on – athletes have been readying themselves, with laser-like focus, for the Commonwealth Games that are approaching.

“Indeed right here in the Caribbean, from the Bahamas to Guyana, so have we. And as the athletes of the Commonwealth prepare for the Games that lie ahead, and as the rest of us await these exhilarating displays of athleticism, the movement of this baton, across the face of the globe, is a great reminder of the thrills and the excitement that the start of the Games will actually bring,” he said, adding that with each country that receives the baton, the start of the actual Games is brought closer and as it travels, it serves as a dramatic and well-timed drum-roll.

He commended all of the Federation’s athletes who trained so hard that they are now eligible to represent St. Kitts and Nevis in the Commonwealth Games and emphasised that it was these commonwealth Games that hardened the ability of sporting icon Kim Collins.

“I commend, as well, those who also trained hard, but did not meet the criteria to participate at this time. The important words there being “at this time.” Because all good athletes know that we live to try another day. And so, we watch as this baton races forward, toward the start of the Games,” Prime Minister Douglas said.

“On that day, a day filled with such anticipation and drama, may the athletes of St. Kitts and Nevis be fired by that competitive spirit that has defined sports since the dawn of time. May they be fired by a spirit of grit and determination. And may they be rewarded with ultimate triumph for the glory of the sport and for the glory of St. Kitts and Nevis. And now, having received the Queen’s baton, St. Kitts and Nevis sends it forward, and awaits, with the rest of the world, that opening day,” the Prime Minister concluded during the ceremony on the steps of Government Headquarters on Church Street, Basseterre.