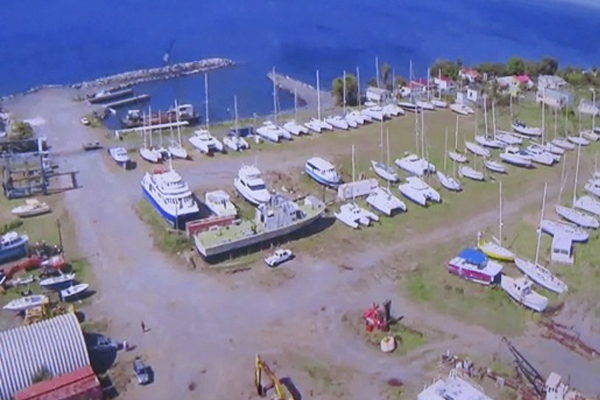 Responding to a caller during his weekly radio call-in programme “Ask the Prime Minister” on Tuesday, Prime Minister Douglas commended local entrepreneur Mr. Regiwell Frances for his entrepreneurial spirit demonstrates in the construction of Telca Marina and the Federation’s first boatyard just under the Brimstone Fortress National Park.

“ I think that what Reg is doing is in fact showing us that it is not only foreign investors who can get into areas that speak to the future successful development of St. Kitts and Nevis. When I outlined and we think of the spin off activities, skills and opportunities for employment that a marina will bring; no longer in the Basseterre area but in the heart of the country; that is what I think makes it so different,” Dr. Douglas told listeners.

“I pledge that I will continue to give to the citizens of this country, that they will find work close to where you live, that is a sacred commitment that this government brings to the people of this country,” said the Prime Minister.

He pointed to White Gate and Destination Sandy Point as opportunities through community tourism activities and development where they are living.

“That is why White Gate is there. People of the area must have first opportunity for employment and others will come of course from outside. That is the change that we have brought to the economic and social landscape in this country. That is the progress that we have brought and that is why we have said that it is real change. It is real progress because it is demonstrated in the very policies that have not only been enunciated by this government, but which has been implemented and practiced and Reg Francis is the epitome of that kind of policy of developing the rural parts of St. Kitts in the same route that we develop the urban parts so that no matter where you are in the country, you benefit,” Prime Minister Douglas reiterated.

He accused the opposition, when it formed the government of developing one part of the nation and ignoring the other areas because their parliamentary representatives were not part of the PAM government.

“When PAM formed the Government, only one half of the Island Main Road was being resurfaced and the other half is not being resurfaced simply because the people who live in that half was not supporting the government. That is the politics of PAM and that is the politics of the Opposition which has been thrown through the window for the last 20 years and must never ever resurface here in St. Kitts and Nevis,” Prime Minister Douglas said.

He said Destination Sandy Point will bring community tourism to the people of Sandy Point, Half Way Tree and the areas that surround them. There is a similar exercise being undertaken in Half Way Tree and although it is not yet completed, they should be commended as well for what they are doing there,” he said.