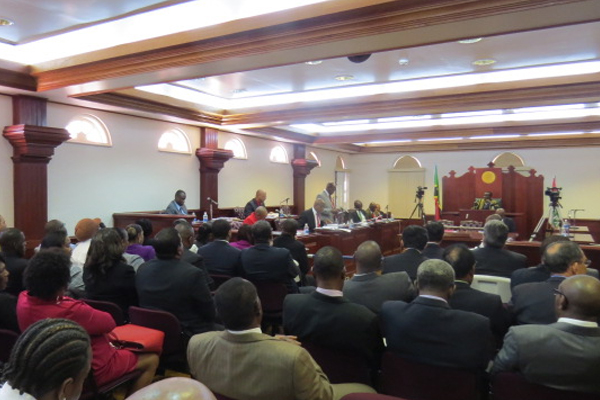 Presenting the 2015 Budget on Tuesday, Dr. Douglas said Recurrent Revenue for the 2013 fiscal year was EC$692.4 million; 30.2% above what we realized in 2012. This outturn was mainly influenced by the continued success of our Citizenship by Investment Programme which brought in fees of EC$276.9 million.

“Revenue from taxes amounted to EC$331.9 million, 2.1% below our estimate but 5.5% above the 2012 level. Taxes collected on Income, Property, Domestic Goods and Consumption and International Trade and Transactions all surpassed the amount collected in the previous year. A notable increase was observed for Stamp Duty which is consistent with the increased sale of land and property under the Citizenship by Investment Programme,” Dr. Douglas disclosed.

He also said that on the Expenditure side, Recurrent Expenditure amounted to EC$446.7 million.

“This was 9.1% above our estimate and 6.5% higher than the amount spent in 2012. The increased expenditure was due primarily to higher due diligence fees for the Citizenship by Investment Programme application process commensurate with the increase in applications received, and an increase in the amount paid for the consumption of electricity. These increases were moderated by a reduction in Interest Payments, a direct result of the debt restructuring exercise. With Recurrent Revenue exceeding Recurrent Expenditure, a Recurrent Account Surplus of $245.7 million was achieved,” Dr. Douglas said.

“Some of the major projects that were undertaken were the upgrade of the Dr Kennedy Simmonds Highway and other road improvements, the upgrade of our education institutions including the Basseterre High School, the construction of the St. Paul’s Day Care Centre and the Warner Park Lighting that has so ably facilitated the Caribbean Premier League (CPL) cricket matches at nights. Funds were also spent to upgrade community centres, install solar street lights, upgrade the ASYCUDA system for the Customs and Excise Department, expand the Canine and Marine Unit also at the Customs and Excise Department and complete the construction of a new police station at Tabernacle,” the Prime Minister and Minister of Finance said.