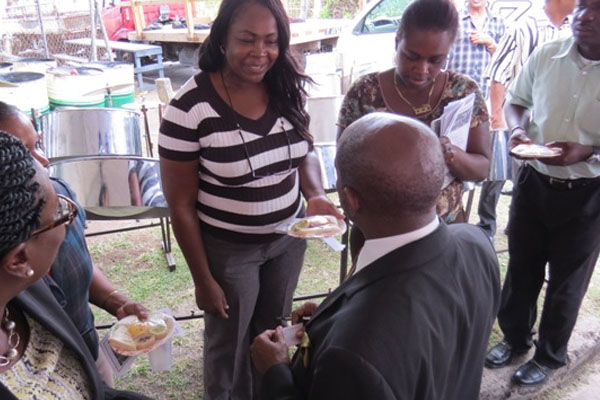 Prime Minister the Right Hon. Dr. Denzil L. Douglas told scores of workers on the C.A. Paul Southwell during a ceremony to launch the New National Minimum Wage and the Long Service Gratuity Scheme that they are valuable and must be protected by the government in an effort to create a vibrant and healthy business environment.

He said that in an effort to protect its workers his St. Kitts-Nevis Labour Government has been in negotiations with the Social Security Board and its management and persons who have been genuinely working hard and making contributions to the Social Security Fund and who happen to become unemployed should not go a begging and should be entitled to a Short-Term Unemployment Benefit.

“I announce today that the final meetings have already taken place and very shortly we shall have those who are unemployed receive a Short-Term Un-Employment Benefit from the Social Security if they happen to become unemployed,” said Prime Minister Douglas at a ceremony that launched the New National Minimum Wage and the Long service Gratuity Scheme.

Prime Minister Douglas said since taking office in July 1995, his Government has been vigilant and has been looking after the welfare of all employees.

“It is this vigilance which has resulted in my Government increasing the minimum wage that can be paid to workers in St. Kitts and Nevis not once, not twice, but three times since we assumed office. That is why, despite the fact that the minimum wage in the Federation is now higher than is paid by any other country in the region, we went into Parliament and increased the minimum amount that employers are able to pay to their workers for a 40-hour work week,” said Prime Minister Douglas during his feature address at the C.A. Paul Southwell Industrial Estate.

“We did this because we truly understand that in addition to creating a vibrant and healthy business environment, in addition to creating a nation that is safe and secure, in addition to ensuring that our country has twenty-first century telecommunications and transportation infrastructure, the workers of this country must be protected, they must be valued, they must be looked out for. And this is what this Labour Government has always done in the past, that is what we are doing today and that is what we will do in the future when this government is returned to office,” he told the cheering workers.

Prime Minister Douglas is of the view that it is not only when the people of the Federation are actually on the job that they need the protection of the Government by the introduction of a legally permissible minimum wage.

He echoed the sentiments of Minister of Community and Social Development, the Hon. Marcella Liburd on the planned introduction of a National Medical Insurance Scheme.

“How many of you? How many of your colleagues and of your family members have had to endure the pain and the agony of using up all of your savings and borrowing from other family members in order to go overseas to deal with a serious chronic illness that have befallen you,” he asked, adding: “That is why we are introducing the National Health Insurance Scheme.”

“Even though I have medical insurance and all those in the top businesses in St. Kitts and Nevis have medical insurance for the big boys, what about the small ladies and gentlemen in our society? What about those of you who are here on the industrial estate today. You have nothing. And so your government will provide you with medical health insurance so that we will ensure that you don’t have to use up all that you have saved in order to save your life from a serious illness.”