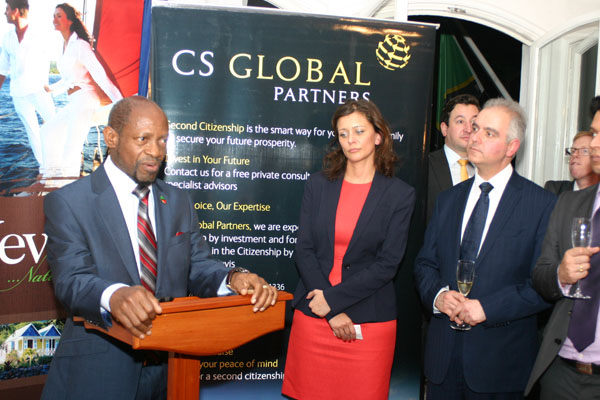 Dr. Douglas, who was in London last week, was at the time addressing several groups and individuals in London where he also highlighted the twin-island Federation’s many social, economic and human development achievements.

At the IBC’s International Citizenship and Residence Conference held at the London Jumeirah Carlton Towers Hotel, Prime Minister Douglas, the keynote speaker of the two-day conference, engaged over 100 representatives from across the United Kingdom and other international jurisdictions in discussions on investment and lifestyle opportunities in St. Kitts and Nevis.

Prime Minister Douglas addressed the merits and benefits of the Economic Citizenship Programme, which is the oldest in the world and quite vigorously policed, and used the opportunity to outline the Federation’s focus under the programme to attract investments, enhance skills and technology transfer as well as strengthening the priority development sectors.

These efforts were further enhanced during the Annual St. Kitts-Nevis Partners Reception held under his patronage at the High Commission on the 31st October 2013, where His Excellency Dr. Kevin Isaac and the Prime Minister engaged with over 100 current and potential development partners, supporters and friends of the Federation.