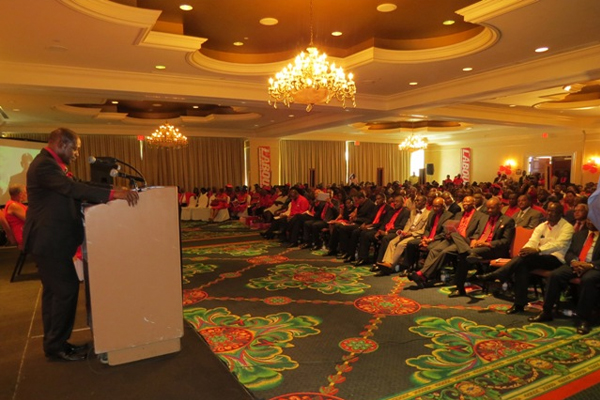 Speaking at the 82nd Annual Conference, Dr. Douglas, the National Political Leader of the St. Kitts-Nevis Labour Party said when the party took office in July 1995, is determined to ensure that St. Kitts and Nevis continues to be a place of stability, peace, and hope.

“That is why we have unfailingly put in place programs and policies, laws and regulations, attitudes and philosophies that take into consideration this country’s men and its women, its young and its old, our employers and our employees, our large corporations and our small businesses, as each, in their own way, plans, and strives, and hopes in pursuit of their respective goals,” said Prime Minister Douglas.

He pointed out that the record shows that the St. Kitts-Nevis Labour Party have, for the past 19 years, encouraged planning across the length and breadth of this country to give Kittitians and Nevisians real reason to hope.

“From this country’s largest corporations to its tiniest entrepreneurs, from its established professionals to its aspiring students, this Labour Government has been a partner and a facilitator for all. Because we know that not only can businesses not succeed without their employees, employees cannot survive without their employers either, not only do entrepreneurs need their customers, but customers need the goods and services that are provided by entrepreneurs as well. The young people of this country need the wisdom and the guidance of the old – just as the old need the vibrant protection of the young,” said the Prime Minister, who added:

Prime Minister Douglas also pointed to the choice that the electorate makes in electing men and women of vision and integrity.

“It is so easy to be in opposition. When one is in opposition, all one has to do is paint glorious pictures about the dramatic changes that one will bring about – once elected. But how many times have we seen politicians and parties speak so eloquently about their capabilities, only to disappoint, grievously, only to usher in stagnation, heartbreakingly, only to bring pain and humiliation, undeservedly. There are so many examples – far away, nearby, and in-between. There are examples from 2014 and examples from centuries long gone by. For this is the nature of politics. And this is the strength of Labour,” said Dr. Douglas, who added that the evidence of his party’s 19 years of dedicated and unrelenting work can be seen.

“It can be seen all around you – the homes, the farms, the scholarships, the loans. Our safety and security. Our economic rankings. Our infrastructure. The training. The investments. You don’t have to imagine, with Labour,” said Prime Minister Douglas to the tumultuous applause of the supporters.

He said the 82nd annual conference is an opportunity to reflect on all that the Government has done and continues to do.