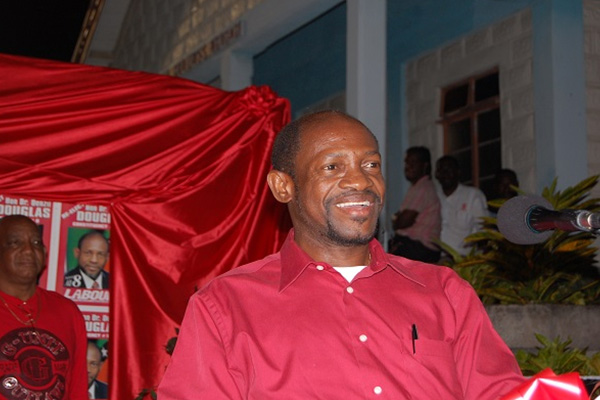 PM Douglas urges electorate to continue to vote for his Labour Party, points to successes of his Government in economic development

Basseterre, St. Kitts  (CUOPM) – With coalition governments worldwide known to be weak, indecisive, unstable and unattractive to investment and with hallmarks of bickering, infighting and gross confusion, Prime Minister of St. Kitts and Nevis, the Right Hon. Dr. Denzil L. Douglas, wants the local electorate to stay clear of the so-called three-party grouping being presented as an alternative to his governing St. Kitts-Nevis Labour Party.

“People in this country are educated. They have come to realise that what is happening here with this ‘Unity Concoction’ is really an attempt to disrupt the smooth functioning of the Labour Party Government, because the PAM Party has come to realise that after changing its leader three times, it still cannot defeat the St. Kitts-Nevis Labour Party,” said Prime Minister Douglas in a recent radio programme “Freedom Talk” on Freedom 106.5 FM.

He was at the time responding to telephone callers including one who referenced a  recent statement by Britain’s Prime Minister, the Rt. Hon. David Cameron, whose Conservative Party is in a coalition with the Liberal Democrats.

Prime Minister Cameron is on the record as committing to a minority government above coalition and indicated he is not preparing to hop back into bed with Nick Clegg (his Deputy Prime Minister) of the Liberal Democrats and company in 2015.

“Because of the confusion, the challenges, the difficulties, the crisis that he would have faced as the Prime Minister of Britain over the last few years since he formed a coalition with another political party, it is very clear to him, having had that experience, never to tread that path again,” said Prime Minister Douglas, who also looked at the confusion and destabilisation where there were or are coalition governments in Grenada, St. Maarten, Trinidad and Tobago and Italy.

“Grenada five to six years ago elected a coalition government and they got I think all but three seats and now 4 years later, in fact halfway through the life of that government it was mired in confusion because of serious battles being played out for the leadership of the party.

I myself went down there about two years ago where I spoke to that party at conference and told them that they should realise that the agenda of the people is bigger than their personal or party’s agenda and that they could not destabilize the country and allow the people to suffer because of their differences,” recalled Prime Minister Douglas.

“My government is a government of the people and I want to warn the people of St. Kitts and Nevis, that if they were to make the mistake of having this coalition concoction’ placed into government, you are going to be sorry. You are going to experience what (British Prime Minister David) Cameron is experiencing today; what (Prime MinisterKamla Persaud- Bissessar in Trinidad and Tobago is experiencing; what (then Prime  Minister Tillman) Thomas in Grenada has experienced; What St. Maarten has experienced several times and what Italy has experienced several times. It will not work and I believe that a word to the wise should be enough,” said the St. Kitts and Nevis leader.

Dr. Douglas pointed out that although St. Kitts and Nevis had its problems, the governing St. Kitts-Nevis Labour Party is a single party with the support of a parliamentarian from a party in Nevis.

“I had to dismiss one (Dr. Harris) to show them how serious I was and then the other one (Sam Condor) resigned a few days after otherwise he would have been kicked out as well. And then the government was able to settle down,” said Prime Minister Douglas.

He pointed out that despite the internal party and government problems, St. Kitts and Nevis under his leadership was able to deal with the economic, social and political problems and move the country in the right direction.

“Look at what the International Monetary Fund (IMF) and all other institutions that have been looking at us are saying. They are saying loudly and boldly that government has performed better under these trying circumstances,” said Prime Minister Douglas, again warning against electing a coalition administration for St. Kitts and Nevis in the next general election constitutionally due in March 2015.