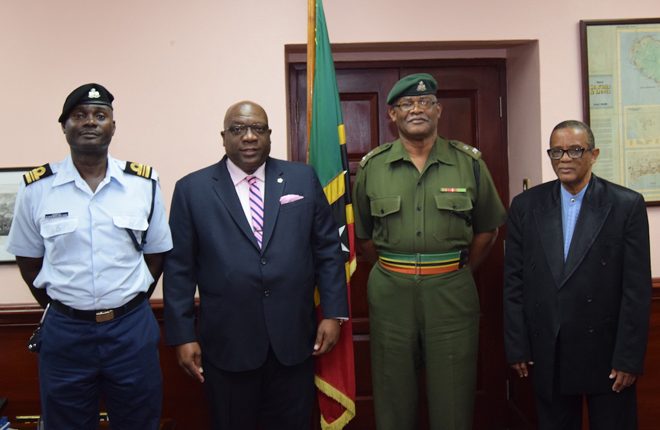 (PRESS SEC) — Prime Minister Dr. the Honourable Timothy Harris yesterday announced the impending retirement of Lieutenant Colonel Commander Patrick Wallace, which is to come at the end of February 2018.

Lieutenant Colonel Commander Patrick Wallace has given 40 years of service to the country’s security apparatus.

Speaking yesterday, Thursday, February 1st, at his first press conference for 2018, the Honourable Prime Minister and Minister of National Security said, “I want personally to record my highest appreciation to Commander Wallace for what I consider to be long, meritorious and distinguished contribution to the safety and security of our Federation.”

Prime Minister Harris disclosed that Lieutenant Colonel Commander Patrick Wallace has recommended – and the Defence Board has accepted the recommendation – that Major Anthony Comrie, who heads the Coast Guard Unit, should succeed him as Commander.

“I want to commend Comrie and his impending elevation,” the Prime Minister of St. Kitts and Nevis said, noting, “Comrie brings a wealth of experience. He was first a police officer…then he went on to the Defence Force.”

Shortly before addressing the nation and the press corps yesterday afternoon, Prime Minister Harris met in his office to take a photo with the Permanent Secretary in the Ministry of National Security, Mr. Osmond Petty; Lieutenant Colonel Commander Patrick Wallace, and Major Anthony Comrie. The Prime Minister of St. Kitts and Nevis thanked Commander Wallace and Major Comrie for their service and congratulated both men on their impending retirement and promotion, respectively, while wishing them well.