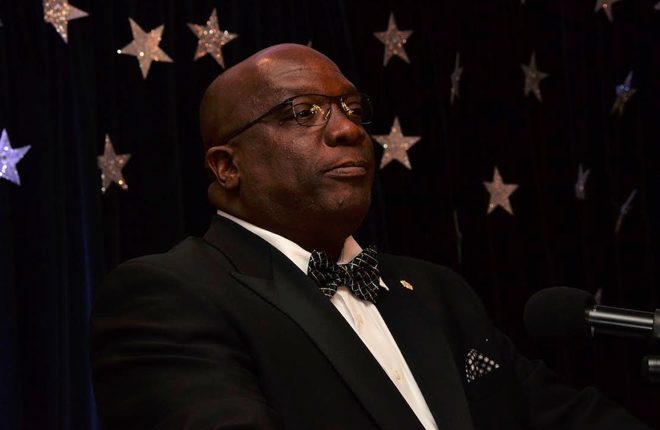 It was a festive night, with lots of socializing, fun, laughter and even a spontaneous rendition by the Honourable Ian Patches Liburd, Minister of Public Infrastructure, Posts, Urban Development and Transport. Minister Liburd sang “One In A Million You.”

Approximately 500 persons sat at round tables of 10 seats, and at the head table were the Honourable Prime Minister; the Governor-General, His Excellency Sir S. W. Tapley Seaton GCMG, CVO, QC, JP; the Honourable Michael Steele, a distinguished American who is a political analyst for MSNBC, as well as the former chairman of the Republican National Committee and Maryland’s former lieutenant governor, and Mrs. Judith Blake, who is a longtime, loyal friend of Dr. Harris’.

The attendees represented a diverse cross-section of citizens and residents, spanning geographic locations, political affiliations, as well as racial, age and socioeconomic differences. They included members of the Team Unity administration, the diplomatic corps, the private and public sectors, religious organizations and civic groups, as well as economic citizens and residents of the St. Christopher #7 constituency where Dr. the Honourable Timothy Harris has spent the past six consecutive terms – since 1993 – as its Parliamentary Representative.

In his welcome remarks, Prime Minister Dr. the Honourable Timothy Harris struck a conciliatory and hopeful tone tinged with patriotism and pride. Dr. Harris noted the diversity of the attendees and explained that all of them had more in common than perhaps they thought.

“I give, of course, to everyone a special welcome because tonight would not have been possible without the turnout,” Prime Minister Harris said on Saturday night. “The diversity, which we see here, represents St. Kitts and Nevis at work. This is a positive development when all of us can come as friends, as former foes, as neighbours, as well-wishers, and what we share in common is a love for a beautiful, small country and a desire to see it shine, a desire to see it become a model for the rest of mankind and for all of human civilization,” the Honourable Prime Minister added.

Dr. Harris continued: “I want to thank all of you for the roles that you have played in making St. Kitts and Nevis a small, unique, powerful, beautiful country of which all of us can be proud. Our aim in the end must be to accept diversity – the strength and the synergies of the diversity – in building this country of which we can all be proud, and the generations after us will be even more proud of our invaluable contributions.”

Prime Minister Harris singled out an invaluable contribution made by the Dr. Kennedy Simmonds-led People’s Action Movement (PAM) administration in 1984, namely the creation of the very first Citizenship-by-Investment Program in the world.

“I say we owe a debt of gratitude to Sir Kennedy [Dr. the Rt. Excellent and the Rt. Honourable Sir Kennedy Simmonds, our first Prime Minister and only living National Hero] and his administration for coming up with an original idea that others after us would copy,” Prime Minister Dr. the Honourable Timothy Harris said on Saturday night.

In St. Kitts and Nevis, a cadre of qualified staff led by Mr. Les Khan, Chief Executive Officer of the Citizenship-by-Investment Unit (CIU), delivers a platinum service to investment opportunity seekers. This platinum service is backed by their high-level expertise in administration, anti-money laundering, immigration, international banking and marketing.

A number of scandals that occurred under the previous Dr. Denzil Douglas-led administration had captured the public’s attention and sullied the reputation of St. Kitts and Nevis’ Citizenship-by-Investment Program.

The electorate of St. Kitts and Nevis voted on February 16th, 2015 and toppled the Douglas-led Labour administration, paving the way for the change-making, people-centred Team Unity Government led by Prime Minister Dr. the Honourable Timothy Harris.

The Team Unity administration employed the expertise of IPSA International, a reputable regulatory risk mitigation company, to implement 20 significant reforms to the Citizenship-by-Investment Program. Mr. Les Khan, who is now the Chief Executive Officer of the CIU, worked as IPSA International’s Project Team Leader for St. Kitts and Nevis.

Significant reforms to the Citizenship-by-Investment Program have been made to rebuild the trust of the international community and demonstrate that the St. Kitts-Nevis Government fully embraces being a responsible member, which will not compromise the security of the other states.