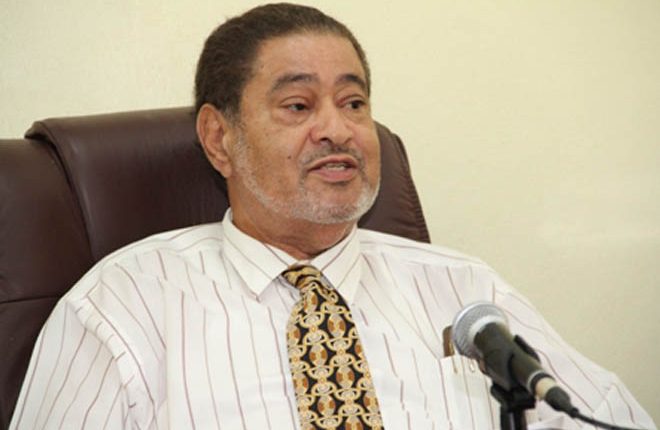 PM Harris expresses condolences to his Honour Mr. Eustace John’s Family and the people of St. Kitts and Nevis

Prime Minister Dr. the Honourable Timothy Harris extends his heartfelt condolences, and those of the Government and people of St. Kitts and Nevis, to the family and loved ones of His Honour Mr. Eustace John CMG who has died. Mr. John was born in Rose Hill, Gingerland, Nevis in 1939.

In 1996, Her Majesty Queen Elizabeth II awarded him the Companion of the Most Distinguished Order of St. Michael and St. George (CMG).

Mr. Eustace John demitted office as Deputy Governor-General for Nevis at the end of April after distinguished service in that capacity for 23 years. His retirement capped 60 years of an extraordinarily diverse and noteworthy work history in the public sector.

In 1957, the late Mr. Eustace John began teaching at the Charlestown Secondary School, and later that year he served as a treasurer and Customs officer until 1960. For the next two years, he was a social welfare officer, working between St. Kitts and Nevis.

Mr. John assumed the post of chief revenue officer in Anguilla from 1962 to 1963 before returning to St. Kitts in 1964 to work at the Customs and Excise Department as its examination officer. In 1966, Mr. John was transferred to the General Post Office, where he worked in the parcel post section as the officer in charge. In 1969, he was transferred to the Premier’s Ministry in St. Kitts and worked there as the administrative assistant to Robert Bradshaw up to 1971.

Mr. John then moved to ZIZ Radio and Television, the state-owned media outlet in St. Kitts and Nevis (known today as ZIZ Broadcasting Corporation, ZBC), to work as its commercial and accounts manager. After working in that capacity until 1972, he was promoted to general manager and spent nine years in that role.

The thumbprint of the late Mr. Eustace John will forever be etched on the annals of ZIZ’s history. On the About page of the ZBC website (www.zizonline.com), under the subheading Expansion, the text reads: “In 1973, recognizing the value of reaching a more discerning audience with a variety of programmes, the management of ZIZ embarked on transmissions on its FM frequency. By 1975, equipment had been purchased to increase the power of the radio station to 10,000 watts and to establish a studio in Charlestown, Nevis.” The studio, which was located upstairs the Charlestown Police Station, thrived for several years until it was damaged by fire.

In 1981, Mr. John left ZIZ to take up the position of accountant general for St. Kitts and Nevis and served in that capacity for 13 years. In 1994, he was appointed to serve as Deputy Governor-General, with responsibility for the island of Nevis, after the expiry of the tenure of his predecessor, His Honour Mr. Weston Parris.

Prime Minister Dr. the Honourable Timothy Harris said today, Thursday, July 27th, 2017, upon learning of Mr. Eustace John’s death, that, “His Honour was a Man for All Seasons, having performed exceptionally well in a number of endeavours that brought his inclusive management style and leadership expertise to the fore.”

Prime Minister Harris also said that, “His knack for marketing and keen eye for detail helped propel him to lead the team at ZIZ, which embarked on an era of remarkable expansion that would broaden the reach and impact of the station during his tenure.”

The Prime Minister of St. Kitts and Nevis continued: “Indeed, the people of the Federation owe a debt of gratitude to His Honour Mr. Eustace John. In consultation with the Government, he executed the vision for the ZIZ Broadcasting Corporation and prepared it to meet the public’s entertainment and information needs. Moreover, his 60 years of yeoman’s service to our islands should be a source of emulation and inspiration for all citizens and residents who love this great Country.”

Prime Minister Harris’ thoughts and prayers are with the family of His Honour Mr. Eustace John CMG, which includes his wife, Dahlia; children; grandchildren, and extended family.