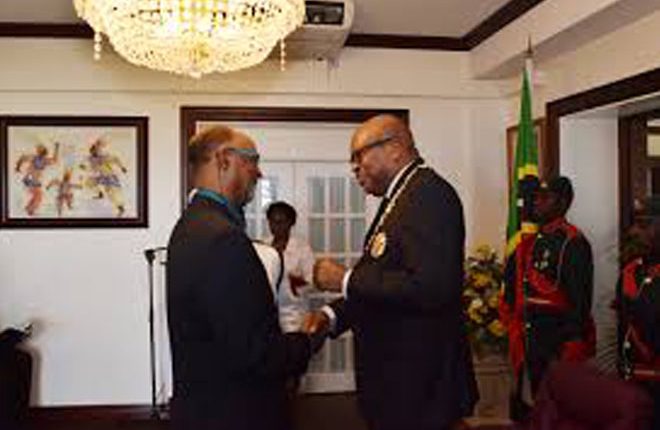 Prime Minister Dr. the Honourable Timothy Harris extends his heartfelt condolences, and those of the Government and people of St. Kitts and Nevis, to the family and loved ones of Dr. Ian Jacobs MBE.

Dr. Ian Jacobs, who last June was conferred the MBE (Member of the Most Excellent Order of the British Empire) for his contributions to Medical Services during the Investiture to present Her Majesty the Queen’s New Year’s Honours for the year 2018, has died. He was 63 years old.

Prime Minister Harris added: “Dr. Jacobs was much loved and respected by his patients and their parents for his genuine concern for their welfare, and for his involvement in coordinating free surgical interventions for many local children through his affiliation with the World Paediatric Project.”

The Prime Minister of St. Kitts and Nevis also said that, “He was widely admired in the medical community and looked up to as a model of professionalism and dedication. Although Dr. Jacobs is gone, a part of him will live on always, inspiring his colleagues, community and country to strive not only for excellence, but also for compassion.”

Dr. Ian Jacobs graduated with his Bachelor of Medicine/Bachelor of Surgery (MBBS) Degree from the University of the West Indies at Mona, Jamaica in 1980. From 1980 to 1982, he was Intern and Senior House Officer at Queen Elizabeth Hospital in Barbados. While there, he did additional rotations dealing with accident and emergency (A&E), conditions of the ear, nose and throat (ENT), and orthopedics.

Dr. Jacobs then assumed the post of District Medical Officer for the Molineux District in St. Kitts and also worked in general medicine and paediatrics at Joseph N. France General Hospital in Basseterre.

In 1986, he went back to the University of the West Indies at Mona to study paediatrics, spending his elective year (1988-1989) at Yorkhill Paediatric Hospital in Glasgow, Scotland and completing his Doctor of Medicine (DM) Degree in Paediatrics in 1990.

Since 1990, Dr. Ian Jacobs worked in St. Kitts and Nevis, caring for hundreds of children at his private paediatric practice and at the Joseph N. France General Hospital, where he served occasionally as the sole paediatric practitioner for over 28 years.

In the course of his notable medical career, he was District Medical Officer at Pogson Hospital from 1990 to 2002, during which time he served as President of the St. Kitts Medical Association (1991-1998). Dr. Jacobs also served on the board of the St. Christopher Children’s Home for many years.