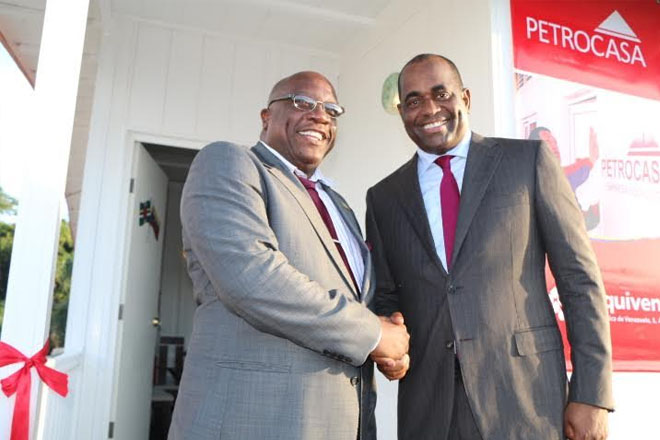 Basseterre, St. Kitts (SKNIS) — Prime Minister of St. Kitts and Nevis, Dr. the Honourable Timothy Harris, received rousing applause from the Dominican people for his government’s contribution of EC$ 1 million made to the Government and People of Dominica shortly after they were pummelled by Tropical Storm Erika that left a trail of unimaginable destruction with over twenty persons dead, persons unaccounted for, infrastructure destroyed, homes washed away and untold suffering.

Prime Minister Harris, along his Minister of Public Infrastructure, Posts, Urban Development and Transport, Ian “Patches” Liburd, travelled to Dominica yesterday (September 23rd) to witness the symbolic handing over ceremony of 300 “petrocasas” by President of the Bolivarian Republic of Venezuela, Nicolas Maduro, a donation from his government to help the displaced people of Dominica after the ravages of the tropical storm.

A few hours prior to the handing over ceremony in Dominica, President Maduro made his inaugural visit to St. Kitts where he participated in the symbolic handing over ceremony of cheques to former sugar cane workers who were left without compensation after the sugar industry closed in 2005. The payment of the sugar workers was made possible by an EC$ 16 million dollar donation from the Venezuelan Government under the PetroCaribe agreement. President Maduro also handed over bulbs and solar panels and signed a Memorandum of Understanding with the St. Kitts and Nevis Government that promises greater cooperation between the two nations.

In his address at the ceremony, Prime Minister of Dominica, Roosevelt Skerrit, lauded the Government and People of St. Kitts and Nevis for their generous contribution.

“I would like to pause here to recognize the generosity of the prime minister of St. Kitts and Nevis and the people of St. Kitts and Nevis, who in a matter of days after the storm, made a commitment of EC $1 million dollars to Dominica in our efforts,” Prime Minister Skerrit said to the cheer of the small crowd gathered at the Douglas-Charles airport.

“Prime Minister, I want to thank you publicly and your people for this extraordinary generous offer of EC $1 million dollars to us,” Prime Minister Skerrit said to the cheers from the crowd.

Prime Minister Harris said his heart was broken to see the destruction caused by Tropical Storm Erika and that the Government and People of St. Kitts and Nevis were moved to render assistance to their neighbor with whom “we share a close relationship”. Dr. Harris underscored the point that there are many Dominicans living and working in St. Kitts and Nevis.

Prime Minister Skerrit said that Dominica will get back on its feet again.

“Our country was impacted upon on the 27th August, 2015, but we are not daunted by the task. We have reinforced our commitment and dedication to our country and I’m saying to all of us that Dominica shall rise again to a country of prosperity because we are comforted by the fact that in our efforts to rebuild our country and to restore the hope in our people that we are not alone in this struggle, that we have friends far and near who are prepared to work with us, hold our hands, and to say to us, we shall work with you as you seek to rebuild your country and restore hope and confidence in your people,” he said.