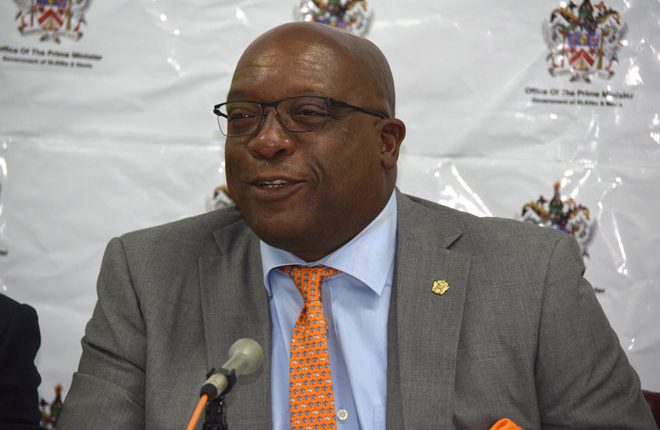 (PRESS SEC) – Earlier this year, Prime Minister Dr. the Honourable Timothy Harris said that 2017 will see his Government wage an even more aggressive campaign to reduce violent activity and crime in general, and yesterday he made it clear the Parliament will play a key role in this regard.

“Parliament is responsible for making the laws,” Prime Minister Harris said yesterday, Wednesday, May 31st, 2017, at his press conference right after stating that, “The seriousness of the crime situation in our Federation must force the realization that it cannot be – it must not be – business as usual. Some changes, some inconvenience even, will now have to happen if we are to turn the tide. So we ask of all to comply with the spirit and the letter of the law.”

The Government’s focus on maintaining law and order has featured prominently in many of Prime Minister Harris’ press conferences, including the one held on Wednesday, February 1st, 2017. Dr. Harris noted back then in February that, “My Government has been leading the way – as every government should – because we accept that a fundamental responsibility of governments everywhere is to maintain law and order.”

During yesterday’s press conference, the Honourable Prime Minister who is also Minister of National Security said that his Cabinet has heard and considered the public outcry for more severe penalties, particularly for repeat offenders and those committing offences related to the illegal use and possession of guns.

“On this score, at the next sitting of the Parliament [Tuesday, June 13th], we will pass the Fire Arms (Amendment)…and the Bail (Amendment) [Bills], to make them more consistent with our people’s views and expectation of our justice system,” the Prime Minister of St. Kitts and Nevis also said.

“Given the prevalence of guns in horrific killings, we propose to seek Parliament’s approval in doubling the penalty for a summary offence from a maximum term of 10 years in certain cases to now a maximum term of imprisonment not exceeding 20 years. The penalty for indictable offences is a maximum of life imprisonment. Summary offences include importation or exportation of a firearm without a permit, the manufacturing of firearms without a license, and unlawful possession of a firearm. These, once the law is passed, will now exact a penalty of a maximum of 20 years rather than 10 hitherto the case,” Dr. Harris added.

“It is our view and the view of our law-abiding citizens that dangerous criminals do not belong on our streets. Every effort will be made to eliminate any opportunity that they may seize upon to victimize innocent people in our country,” Prime Minister Harris further stated.

The Honourable Prime Minister continued: “In relation to bail, therefore, we intend to make it more difficult for criminals to receive bail in relation to both a capital offence, such as murder, and a firearm offence at the same time. This will militate against criminals on bail exacting vengeance on witnesses and innocent people in our society.”
Prime Minister Dr. the Honourable Timothy Harris went on to reveal that, “We propose that the court would consider imposing a monitoring device, for example an ankle bracelet, on certain persons as a condition of bail.”

Last year alone, 15 bills were passed in the Parliament. Significantly, the Team Unity administration has piloted pieces of legislation that have great significance to various industries and stakeholders, including the poor and middle class.

For instance, the Team Unity administration piloted the Administration of Small Estates (Amendment) Bill 2015 through Parliament and it was passed into law on November 25th, 2015 through publication in the Gazette. This allows persons to quickly and easily access an inheritance of a small estate. Importantly, too, the 2015 amendment raised the small estate threshold from EC$5,000.00 to EC$25,000.00.