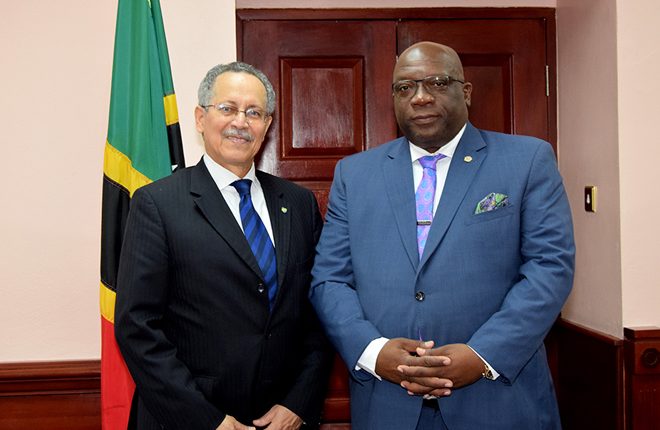 (Press Unit in the Office of the Prime Minister) – St. Kitts and Nevis’ Prime Minister, Dr. the Honourable Timothy Harris, today (Tuesday, March 27) met with Secretary General of the African, Caribbean and Pacific (ACP) Group of States, His Excellency Dr. Patrick Gomes, where matters pertaining to the future development of grouping was discussed.

The brief but productive meeting was held in the Office of the Prime Minister at Government Headquarters.

Secretary-General Gomes’ meeting with Prime Minister Harris was held on the margins of the Special Meeting of the Council of Ministers of CARIFORUM, which took place at the St. Kitts Marriott Resort from March 26-27.

Among the issues discussed during Tuesday’s meeting was the upcoming post-Cotonou discussions between the European Union and the ACP countries.

The ACP-EU Partnership Agreement, signed in Cotonou, Benin, on 23 June 2000 for a 20-year period, is the most comprehensive partnership agreement between developing countries and the EU. Since 2000, it has been the framework for EU’s relations with the 79 countries from Africa, the Caribbean and the Pacific.

Prime Minister Harris expressed his pleasure in receiving His Excellency Dr. Gomes and conveyed his profound gratitude for the words of commendation from the ACP Secretary-General on the leadership he can bring to the post-Cotonou discussions.

The “Cotonou Partnership Agreement” is set to expire on 29th February, 2020. In his statement at the 37th COMESA Council of Ministers meeting in Lusaka, Zambia on 3rd November, 2017, Secretary-General Gomes said formal negotiations for its successor are due to commence in August 2018.