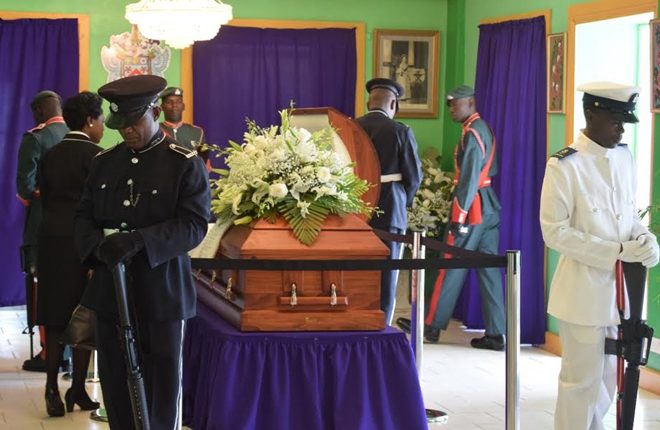 Prime Minister Harris reflected on Sir Cuthbert’s unfailing presence at events, noting that there was never a time when he was missing, especially at sport and speech days, awards and presentations, the traditional and ceremonial activities on Independence Day, at the memorial service on Remembrance Day.

“Everywhere, Sir Cuthbert was present and ensured that the office provided patronage and presence at many functions. I believe this is one area in which he redefined the role of the Governor General, [as the office was] hitherto somewhat excluded from the people of St. Kitts and Nevis, excluded to the extent that it was available in a limited way [due to] long-established tradition,” said Dr. Harris. “Indeed, the record of one Governor’s memoir would show that in the early 20th century, this Government House was not accessible to more than about 250 persons for any event. By the time that Sir Cuthbert had taken over, our Independence celebrations, for example, would have hosted thousands of persons on the compound of Government House, and that was the nature of the man.”

Still reflecting on the contribution and memory of Sir Cuthbert Sebastian, Dr. Harris further stated that, “He was a man for all seasons, for all people in St. Kitts and Nevis.” Prime Minister Harris also noted that by the way in which he revolutionized the Office of the Governor General, he ensured that the people of St. Kitts and Nevis felt a sense of attachment to the office. Dr Harris added that His Excellency also understood that the office was there to serve persons and sever them well.

Prime Minister Harris added that his contribution to St. Kitts and Nevis and its history means a lot. He said his life of service is clearly one that the citizens and residents of St. Kitts and Nevis should emulate, as his life was one marked by industry, dedication and commitment.

His Excellency Sir Cuthbert Montraville Sebastian, will be laid to rest today, Monday, April 10, 2017, at the Springfield Cemetery, following a State Funeral with full Military Honours at the St. George’s Anglican Church in Basseterre, St. Kitts. Sir Cuthbert was 95 years of age at the time of his passing on March 25, 2017.