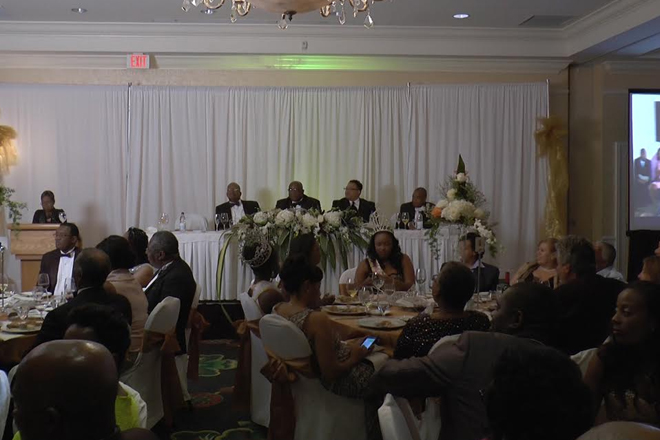 (ZIZ News) — It was a night of elegance, on Saturday, as hundreds of persons gathered at the Marriott Resort to celebrate the New Year with Prime Minister, the Hon Dr. Timothy Harris at his New Year’s Gala.

Government officials, other dignitaries and members of the public were in attendance.

Addressing the gathering, the Prime Minister thanked them for joining him at the festive occasion and hoped that they would continue to show support as his government works to advance the nation.

He said he hoped that they “will really join us in a genuine partnership to advance this Federation on a higher and better path of growth and development so that not only us but the generations after us can look back and say we have done well.”

Dr. Harris added that the legacy he wants to leave is that they used their stint in office “to further build, to further create, and to advance all the citizens and residents of St. Kitts and Nevis.”

Reflecting on the history of Team UNITY, Prime Minister Harris thanked his political colleagues for demonstrating their confidence in the concept of coming together in the best interest of St. Kitts and Nevis.

Among those singled out for praise was Nevis’ Premier the Hon Vance Amory.

He said “there was much wisdom now in hindsight in the approaches, in the restraint, in which he advised when there were many tempting situations facing the group. And that is why I’ve said repeatedly, publicly, that Premier Amory has been a bulwark of support, of strength, within this Team UNITY Movement and to date, every word he has said to me, he has kept his word.”

The Prime Minister spoke of the government’s accomplishments in the past year, including the welfare of the students at the Basseterre High School.

“We ended the shift system that had created trauma in society for three years. Less than one year and we were able to fix that problem that we inherited and on the fourth of January we shall have the official opening of the temporary location for the students and teachers at the Basseterre High School,” he said.

The Prime Minister also promised that within 18 months, the government will offer, a brand new modern Basseterre High School.

In closing, Prime Minister Harris noted that Team UNITY is always about good governance and working for the further development of the nation and called on everyone to join the government in moving St. Kitts Nevis forward.