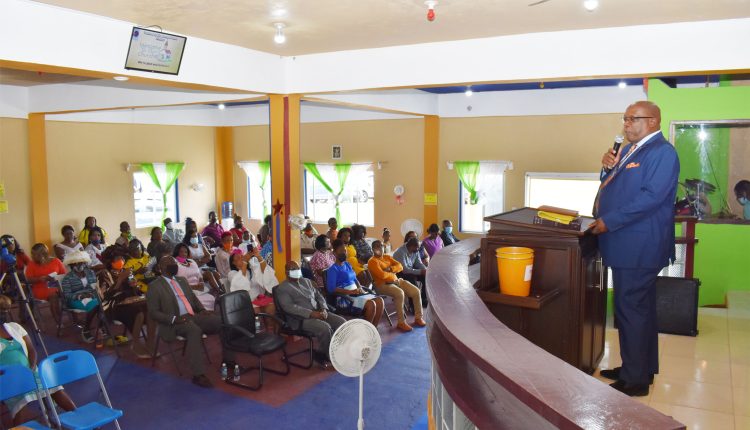 While stating that the country needs more people praising and acknowledging God, Prime Minister Dr. The Honorable Timothy Harris has commended Touched by His Wounded Hands Ministry International for bringing and setting up its house of worship in the Shadwell area of Basseterre.

“We need more people praising God, and acknowledging God,” Prime Minister Harris told his host, Apostle Bernard Huggins, during a morning thanksgiving worship service at the church which is situated in Pines Garden, Shadwell, on Sunday, May 16.

Prime Minister Harris had accompanied the extended family of the late Prisons Officer Ms. Margaret Lucinda Lewis who had gone to give thanks for the support they had received from the church during the time of bereavement after they lost their mother and matriarch, and burial which was conducted on Monday, May 10.

Also in attendance was Acting Chief Fire Officer Mr. Garfield Hodge, who came to support a daughter of the Late Ms. Margaret Lucinda Lewis who was the organizer of the thanksgiving event, Fire Officer Marsha Lewis.

“Thank you very much for being a church that worships,” said Prime Minister Harris. “At the funeral (of Ms. Margaret Lucinda Lewis) I saw how well you worship here. You have some of the best singers in the churches, so at the National Day of Worship, we must have your choir with us. I want to commend them all, and to commend the spirit of service to God which this church is sowing.”

Speaking on behalf of the Lewis family, Ms. Marsha Lewis thanked Prime Minister Dr the Hon Timothy Harris for the personal support he gave by standing with the family and attending the funeral service at the Immanuel Methodist Church, Crab Hill, in Sandy Point, the burial at the Church Cemetery, Downing Street on Monday, May 10, and the thanksgiving service at Touched by His Wounded Hands Ministry International, Pines Garden, on Sunday, May 16.

Ms. Lewis who was supported by their eldest brother, Mr. Calvin Lewis, said that her late mother was a member of the Touched by His Wounded Hands Ministry International church, and thanked Apostle Bernard and Prophetess Michelle Huggins for their support. She also thanked Mrs. Patrice Ofre, and her husband Dr. Matthias Afortu-Ofre for their support as well.

Prophetess Michelle Huggins led the congregation in praying for the extended family of the Late Margaret Lucinda Lewis and offered journey mercies for most of the family members who reside overseas, and who had come home for the funeral, on return to their homes.