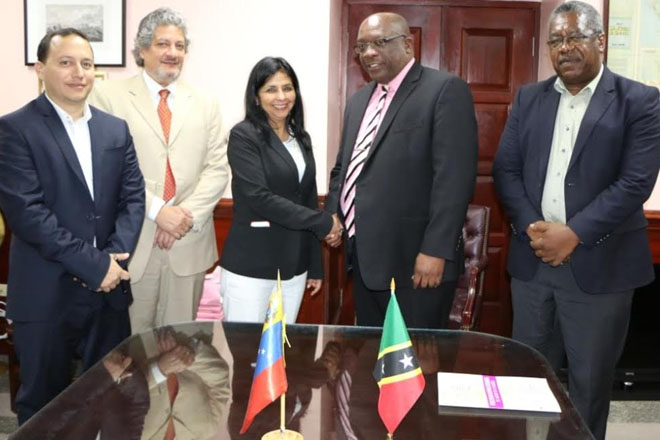 Basseterre, St. Kitts (SKNIS) — Resolving the dispute between the Republic of Venezuela and Guyana was among key matters discussed when a Venezuelan team met with St. Kitts and Nevis Prime Minister Dr. the Honourable Timothy Harris over the weekend.

The Prime Minister revealed that the discussions were of importance not only to the Federation but to the region as well, and thanked Venezuelan President Nicolas Maduro for sending his team headed by Minister of People’s Power for Foreign Affairs Honourable Delcy Rodriquez-Gómez. Specifically, he pledged the commitment of St. Kitts and Nevis in working with both Venezuela and CARICOM member-states to resolve the matter which he described as “a difficult development in the relationship between Guyana and Venezuela,” noting that the Federation is on friendly terms with both countries. “We would wish for the amicable relationship between Guyana and Venezuela to be maintained,” he said.

“We value always the outstanding good relations, excellent relations, in fact, that have developed between Venezuela, the government and people there and the government and people of St. Kitts and Nevis,” Prime Minister Harris said while commending the foreign policy of late President Hugo Chavez and its continuation under President Maduro. “And we would want that relationship to continue since we cherish our productive and profitable engagement with the Bolivarian Republic of Venezuela, and we will work assiduously for peaceful resolution of the dispute between Guyana and Venezuela. To this end we will engage CARICOM and assure Venezuela of our ongoing solidarity and cooperation.”

Venezuela and Guyana border each other and the dispute is a territorial matter dating back more than 100 years.

During the Venezuelan team’s visit, Prime Minister Harris was also briefed on the Republic’s perspective on the current Ecuadorian domestic protests. He called for support for the maintenance for the democratic order in Ecuador, in compliance with the Organisation of the American States (OAS) democratic charter.