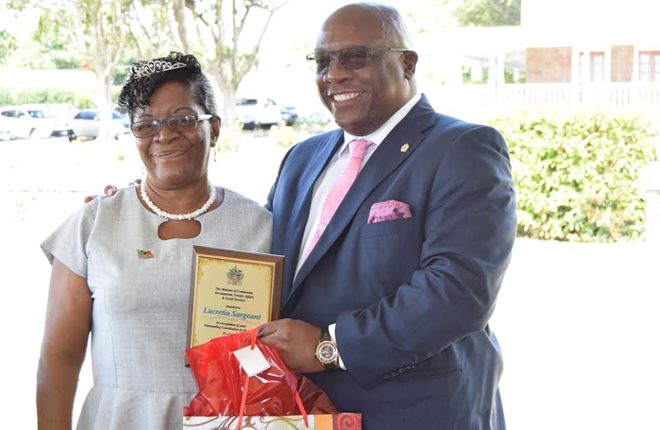 Basseterre, St. Kitts, March 08, 2017 (SKNIS): Women across the Federation of St. Kitts and Nevis were saluted and commended for their contribution to the development of the country, in particular, to the world of work, by Prime Minister Dr. the Honourable Timothy Harris, during the opening of the Victoria Road Pre School on Tuesday March 07.

Prime Minister Harris was at the time commending women on the eve of International Women’s Day, which is celebrated on March 08 each year. This year, the day is celebrated under the global campaign theme “Be Bold for Change”.

Commenting on the campaign theme, Dr. Harris said that focus is given to women in the world of work, while noting that St. Kitts and Nevis can boast of the many women who lead in the workplace.

“It focuses primarily on women at work with a reminder that it is part of the United Nations goal to achieve gender balance in the workplace 50/50 by the year 2030, and 2030 is significant because it is the goal post, in fact it is the date set for the fulfillment of all the development agenda outlined under the sustainable development imperative of the United Nations,” said Prime Minister Harris, adding that the federation is on par with the goals. “Of course, with respect to women at work, St. Kitts and Nevis is very much in advance of this goal. There are some areas at which women excel and indeed dominate the workplace. Some of them come quickly to mind: education, early childhood, health delivery, gender and counselling.”

At a ceremony to recognize women for their contribution and to celebrate their achievements on Wednesday, March 08, at Government House, Celia Christopher, Director (Ag.) in the Department of Gender Affairs, shared similar sentiments as it relates to the campaign theme, noting that there is no single way to “Be Bold for Change”.

“It is simply a rallying cry to women across the globe to fight for gender equality in their communities, workplaces or wherever they are, since we can all be leaders within our own spheres of influence by taking bold pragmatic action through collaboration,” said the acting director. “To Be Bold for Change also means we can support women’s education, we can help women advance and unleash the limitless potential offered to economies throughout the world, or we can help to stop gender-based violence.”

The acting director said that the Department of Gender Affairs will be partnering with a number of civil society and private and public sector organizations to conduct a number of activities throughout the month of March to celebrate International Women’s Day 2017. Some of the activities include but are not limited to the launch of UNESCO’s Single Mother’s Advancement Resilience and Training (SMART) Project, distribution of care packages to women shut-ins in communities, documentaries on centenarians, radio programmes, health march and rally and round table discussion on ZIZ Television.