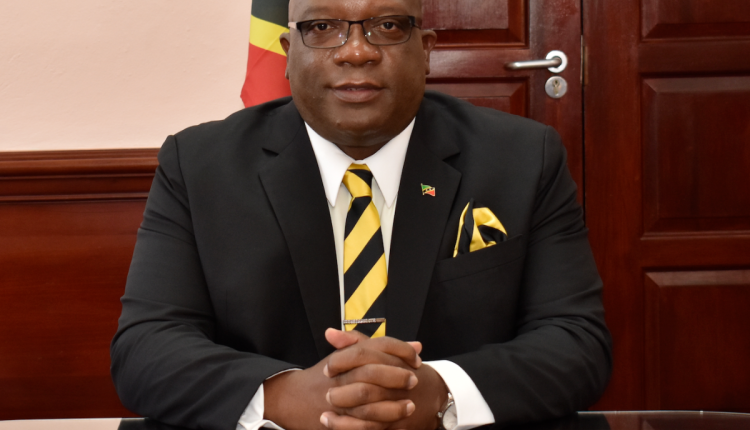 Basseterre, St. Kitts, September 20, 2021 (SKNIS): As the Federation of St. Kitts and Nevis celebrates its 38th Anniversary as an independent nation on September 19, the country’s prime minister, Dr. the Hon. Timothy Harris said that in a relatively short time the twin-island state has had “a remarkable record of growth and national achievements.”

“Though many countries preceded us in becoming independent states, we moved with alacrity on our national developmental goals. We made tremendous leaps in public health, education, infrastructure, economic transition, trade and international relations, human rights, sports and culture. We are constantly being rated among the best in the region, across so many international developmental indices. Literacy rate, per capita income, rule of Law, Debt to GDP ratios, ICT indicators, transparency and good governance are some examples of areas in which we have been leading our peers,” Prime Minister Harris said.

He highlighted the country’s achievements in sports and entertainment internationally.

“We have, in our relatively short time as an independent nation produced a World Champion in Athletics; Olympians, internationally recognized artists, and a renowned FIFA referee, assessor and trainer. We have hosted ICC cricket and FIFA football. We have youths excelling internationally in robotics competitions. Just days ago, St. Kitts and Nevis Patriots Franchise emerged as the Caribbean Premier League champions. Likewise, our people as proud patriots of our beautiful nation must continue to strive to emerge as champions even in the face of adversity,” he said.

Additionally, Prime Minister Harris said that Kittitians and Nevisians in the Diaspora have excelled in many areas and disciplines.

“We have witnessed with much pride and admiration the achievements of our people in the diaspora, and noted their excellence in artistry, international business, technology, medicine, scholastic and scientific research, politics and diplomacy. Our citizens hold senior and important positions in multinational corporations, foreign governments, international bodies, universities, and entertainment. We have achieved all these, making these feats even more notable and commendable given our small size,” Dr. Harris outlined.

However, the Federation’s third prime minister, who hails from the village of Tabernacle and who is an accountant by training, said that Kittitians and Nevisians must not rest on their laurels because there is much more to achieve and a lot more work to be done in national development.

“We have so much to be proud of as Kittitians and Nevisians. Indeed, we are a special people, molded by our heritage, our struggles, our shared sacrifices, and our successes, over generations. We have accomplished much, but we have so much more to accomplish. I declare today that we will with God’s help, and we will do so through adaptation, diversification and recreation,” he said, noting the country’s theme for its 38th anniversary of Independence: “Adapt, Diversify, Recreate: Independence 38”

A significant portion of the prime minister’s Independence address on September 19 was spent on addressing the most pressing and troubling issue in the whole world—the COVID-19 pandemic.

“Over the last eighteen months, we, like the rest of the world, have had some challenges. We have been fighting this dreaded COVID-19 pandemic, and we have been coping relatively well,” Dr. Harris said. “We are still in this fight against this invisible enemy— the coronavirus, that has wreaked havoc across the world. However, together we must overcome this challenge.”

However, he said that overall St. Kitts and Nevis is one of the best countries to live, work and play.

“On the whole, when we look at the world landscape and consider political stability, economic advancement, standards of living, and quality of life, as well as employment and investment opportunities, St. Kitts and Nevis remains among the best places to live, and still proudly stands as the best run, best managed small island state in the world. Thanks be to God. The Lord has blessed our people with extraordinary talents and He has blessed this nation with extraordinary gifts which include our people,” Prime Minister Harris said.