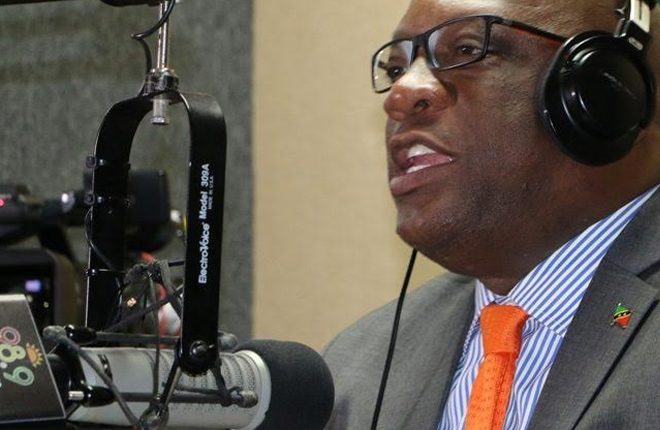 BASSETERRE, ST. KITTS, OCTOBER 20TH, 2016 (PRESS SEC) – Shortly after landing in Tortola in the British Virgin Islands this afternoon, Prime Minister Dr. the Honourable Timothy Harris of St. Kitts and Nevis paid a courtesy call on Dr. the Honourable Kedrick D. Pickering, who is Acting Premier while Dr. the Honourable D. Orlando Smith, OBE is away on business for the B.V.I. Asian Trade Mission.

The visit was cordial and warm, and the two men discussed, among other things, Prime Minister Harris’ forthcoming town hall meeting with Nationals of St. Kitts and Nevis who live in the B.V.I. The town hall is scheduled for 8:00pm this Saturday, October 22nd at the Althea Scatliffe Primary School in Road Town.

Dr. Harris and Dr. Pickering will meet again tomorrow, Friday, October 21st at the 86th Meeting of the Monetary Council of the Eastern Caribbean Central Bank (ECCB). The meeting will be convened via video conference from the Headquarters of the ECCB in Basseterre, St. Kitts. Prime Minister Harris, who is the OECS Authority Chairman, is scheduled to join the 9:00am meeting via video conference from the Office of the Premier in Road Town.

Prior to the 86th Monetary Council Meeting, the Prime Minister of St. Kitts and Nevis will have breakfast with the B.V.I.’s Leader of the Opposition, Honourable Julian Fraser, RA. Mr. Fraser, a registered architect who represents District 3, extended an invitation to Prime Minister Harris to be his special guest at breakfast in the company of his wife Mrs. Kharid Fraser and several St. Kitts-Nevis Nationals who live in his district.

Tonight (Thursday) from 8:00pm, the Prime Minister of St. Kitts and Nevis will be the special guest on ZBVI Radio 780 AM’s program Umoja [which means unity in Swahili] hosted by Mr. Cromwell Smith who is popularly known as Edju En Ka. You can listen live at http://www.zbviradio.com.

During his Umoja radio appearance, Prime Minister Harris will offer a preview of what he will say to St. Kitts-Nevis Nationals at Saturday’s town hall and highlight the stellar economic performance of the Federation, which stems in large part from his Team Unity Government’s people-oriented policies and prosperity agenda.

Dr. Harris will also discuss the mission and objectives of the Department of People’s Empowerment in the Office of the Prime Minister. The Department’s Director, Mr. Duncan Wattley, is accompanying the Prime Minister in the British Virgin Islands. Outreach to Kittitians and Nevisians who live in the diaspora falls under Mr. Wattley’s purview.