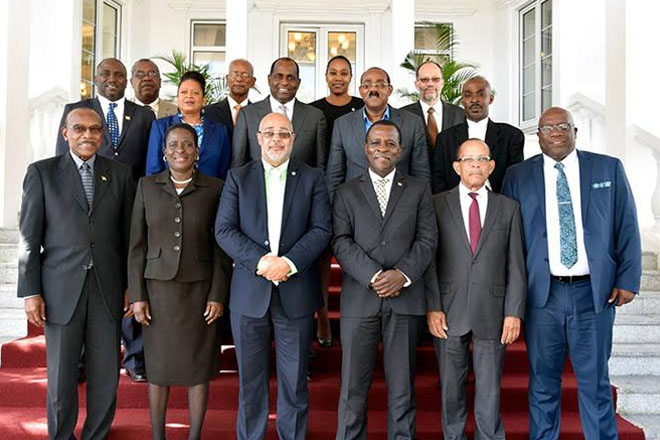 PM Harris to chair 63rd Meeting of the OECS Authority, first to be held via videoconference

(PRESS SEC) – The 63rd Meeting of the OECS Authority is scheduled to take place on Tuesday, July 12th, via videoconference from 9:00am. The meeting will be held under the chairmanship of the Prime Minister of St. Kitts and Nevis, Dr. the Honourable Timothy Harris, who is the new Chairman of the Organisation of Eastern Caribbean States (OECS).

“The Commission wishes Heads of Government to note that since this is the first use of the videoconference facility and given the fact that there are a couple of new Heads of State, this meeting would be a business meeting to focus on inescapable matters that require decisions. The regular meeting in November will be a face-to-face meeting where all the ceremonial procedures for the welcoming of new Heads of Government will take place,” wrote the Director General of the OECS, Dr. Didacus Jules, in a May 12th, 2016 correspondence addressed to the Heads of Government and copied to OECS Commissioners. St. Kitts and Nevis’ OECS Commissioner is His Excellency Ambassador Sydney Osborne.

The 64th Meeting of the OECS Authority will be held in November 2016. The date and venue of the 64th Meeting will be finalized on Tuesday, July 12th.

The OECS Authority meets twice a year and its chairmanship changes every June. On Monday, June 13th, 2016, the Prime Minister of St. Kitts and Nevis delivered a feature address as the incoming OECS Chairman during the press conference to launch the 35th Anniversary Celebrations of the establishment of the OECS. Heads of Government/their representatives formed the OECS with their signing of the Treaty of Basseterre on June 18th, 1981 in the capital city of St. Kitts.