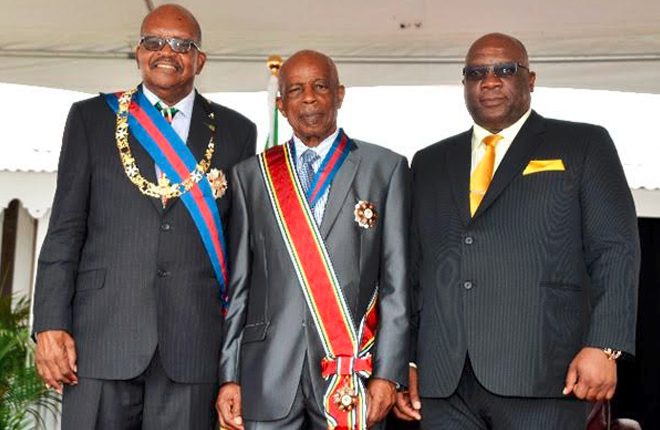 Last year on his birthday, Sir Kennedy received a congratulatory visit at his home from Prime Minister Dr. the Honourable Timothy Harris. The Cabinet Secretary, Mrs. Josephine Huggins, and Senator the Honourable Wendy Phipps accompanied the Honourable Prime Minister, who extended 80th birthday greetings last April on behalf of the Government and people of St. Kitts and Nevis.

Today, Prime Minister Harris, who is in St. Vincent and the Grenadines to attend a couple of high-level sub-regional meetings, congratulated Sir Kennedy on his 81st birthday, saying: “The nation feels blessed and extremely grateful that you are still with us to help light the path forward as a beacon of strength and wisdom for old and young alike. We proudly share in the celebrations with you and your family.”

Dr. Harris added: “Today, as I carry the baton that you adeptly held as our first Prime Minister, I reflect on how magnificently you served the people of this country. As our leader, you brought out the very best not only in your colleagues, but also in society. Whether in tourism, education or housing – whatever the sector – your pioneering impact and influence will be imprinted forever on each new chapter in the story of this great land. We thank God that the gift of longevity has enabled you to appreciate the fruits of your hard work.”

In 1945, he attained a scholarship to the St. Kitts-Nevis Grammar School based on his outstanding performance in the primary school entrance exam.

Kennedy Alphonse Simmonds would go on to become a medical graduate of the University of the West Indies in 1962 then a founding member of the People’s Action Movement (PAM) party in 1965, President of PAM in 1976, Premier of St. Kitts and Nevis in 1980, and the first Prime Minister of St. Kitts and Nevis between 1983 and 1995.
In 2004, Her Majesty the Queen appointed the former Prime Minister as a Knight Commander in the Most Distinguished Order of St. Michael and St. George.

The Order of National Hero – the nation’s highest award – was bestowed on Sir Kennedy in September 2015, and His Excellency the Governor-General Sir S.W. Tapley Seaton GCMG, CVO, QC, JP formally conferred the title on him at a special Investiture Ceremony at Government House on Tuesday, June 28th, 2016.