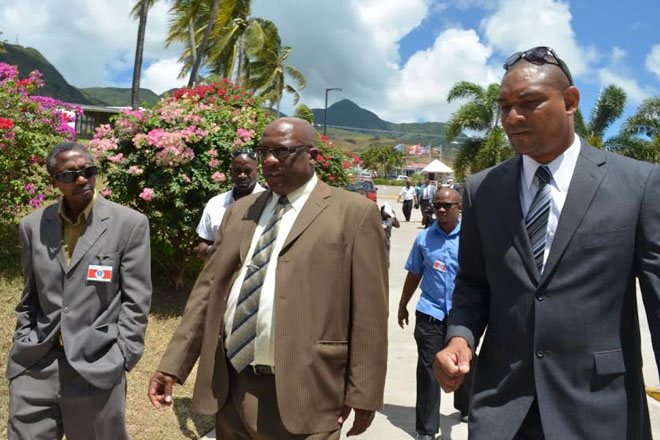 Basseterre, St. Kitts (SKNIS) — Prime Minister Dr the Hon Timothy Harris met with the Dean and other officials of DeVry Medical International at Ross University School of Veterinary Medicine to discuss how the university can increase its contribution to the socio-economic development of the country, especially as it relates to security and law enforcement, education, training and socio-economic programmes.

The Prime Minister stressed the importance of a cumulative approach to crime-fighting, noting that the involvement of all in society is required in making the federation a safe place for all.

“We see the challenges of crime as a societal one, meaning it requires the help and the attention of all citizens and residents and those who really want to help us build a St. Kitts and Nevis that can be a model for progressive element. And therefore as we work on these matters we will adopt a consultative approach with wide outreach, always making room for the opinions and suggestions of other stakeholders to find their way at the highest level of decision making,” Prime Minister Harris said.

John Kroen, Vice President of Civic Affairs and Veron Lake, Regional Security Projects Manager of DeVry informed the Prime Minister about some of the ways in which existing programmes such as Crime Stoppers as well as scholarship offers and other contributions can be expanded to further benefit the country and improve the school’s relationship with local stakeholders.

“We continue to look for ways to make improvements in terms of technology that we’ve been able to build over the last three to four years in hopes that we’ll be able to transfer that technology to the country to bring security to a new level,” said Kroen. “In addition to that, research has become a significant part of our institution and we look forward to working with the government on new processes and procedures to make sure that research elements come in and that we represent the country in a very positive light to the international community in terms of health and animal research.”

Kroen also spoke about Ross’s contribution to security by way of security patrols, placement of emergency call boxes around the island and the use of the university’s K9 unit which works alongside local police.

Lake informed Dr. Harris of the school’s continued support for the local community through its donations to the Mary Charles Hospital at Molineux.

“We are going to be making a general donation to improve not only the customer service experience but also the patient experience as well,” said Lake. “That donation in cash and in kind will be somewhere within the region of around 25 to 30 thousand US dollars and that is just the initial donation and we think that will have a significant on the users of that hospital. We know that the hospital is generally used by people of that area but also for teaching and learning so we’re very happy to partner with the Government for that. We’ve also made a significant investment toward the main road lighting as well so we’re going to be lighting that stretch of road from the nursing school right down to West farm. We’re also going to be putting a foot path for the safety of the citizens of the area who use that area of land. We’re going to be supporting the Green Island Initiative through our partnership with the ministry of energy and we’ll be using standard LED lights and we think that will improve the safety of the area without costing the government any significant financial burden.”

Lake also spoke of the School’s interest in assisting with the agricultural sector by engaging local officials on marine protected areas, which will be significant for research, teaching and learning.

The Prime Minister expressed his gratitude for the school’s contribution to social development within the federation and pledged his government’s support for its future endeavours, especially as it relates to crime fighting.

“Ours is a welcoming country. The government has always been supportive of your school and that support will continue. Like all citizens and residents we in the government are equally concerned about matters of safety and security and we have committed that we will do all in our power to ensure that St. Kitts and Nevis is a safe and secure place. And that is a commitment from which we will not recoil and so the country can rest assured that in our mind safety, security and issues of law and order assume priority. We therefore welcome all efforts by public and private sector partnerships to ensure that we are able to provide the necessary resources required to deal with the challenges of law and order within the country.”

The talk was followed by a tour of the school’s Emergency Operation Center, which houses advanced technology that can be used by local law enforcement to improve their emergency response. The Technology features an advanced tracking system, with facility for detailed biographical data as well as CCTV monitoring.

The Prime Minister also had wide ranging discussions with the Dean, Elaine Watson and Vice Dean, Richard Shone of the school.